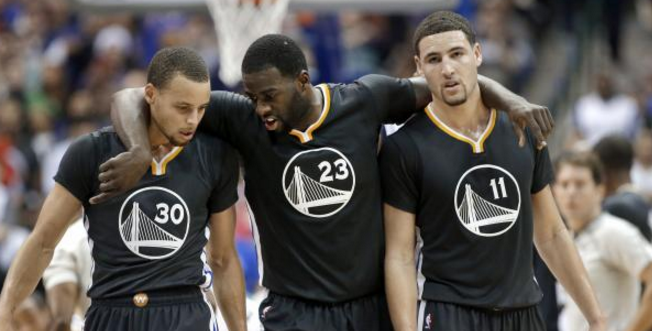 Sunday night’s victory in New York pushed the Warriors to 43-4 on the season. This puts them slightly ahead of the 1996 Bulls’ pace, who only went 43-5 through their first 48 games. We’re past the halfway point, so it seems like a fairly appropriate time to briefly assess the Dubs’ chance to keep ballin’ at a record-setting pace.

First and foremost, the schedule gets tougher. Golden State is so good that Oklahoma City and San Antonio are the only remaining teams on the slate even worth mentioning as potentially difficult matchups. The Warriors will see each team three times down the stretch, including a April 10 meeting in San Antonio on the second night of a back-to-back.

The most worrisome stretch of the Dubs’ second-half schedule though, is the post-All Star break road trip. The six-game swing (Feb. 19-27) features two back-to-backs, and stops in Los Angeles (Clippers), Atlanta, and Oklahoma City.

Having said that, the Warriors are just as likely to lose on some random night, for any number of reasons that affect teams over six months of traveling and basketball. Their four defeats have come in Milwaukee (concluding a seven-game road trip, after double-OT the previous night), at Dallas (without Steph), in Denver (without Draymond, and altitude!), and a few nights later in Detroit.

It’ll be challenging for the Dubs to maintain their pace as the season drags on, and, of course, they have to really want it. They’ve downplayed any 72-win talk for the most part, although Steph did acknowledge that “if we happen to creep up close to that record, we’ll go get it.”

Still, it seems like they’re going for it, indicated by the fact that they didn’t shut down Curry for a lingering calf injury a few weeks ago. With only a few contending teams, the NBA season needs an engaging second-half storyline.