On Thursday, the NBA trade deadline came… and went with a whimper. As per the course for any trade deadline, All-Star names were bandied about as trade targets. This year’s installment included the likes of Jimmy Butler, Carmelo Anthony, and Paul George. However, none of these players were moved.

Much of the intrigue came days earlier – as Serge Ibaka and DeMarcus Cousins were dealt.

This piece will take a look at the winners and losers from a mostly uneventful trade deadline: New Orleans swung for the fences and brought in an immensely talented player in Cousins.

Yes, his troubles on the court have been well documented. Cousins has displayed erratic behavior leading to a multitude of meltdowns and technical fouls. In some aspects, it may be hindering his ability to reach his full potential. With that said, how much of these issues were on Cousins himself, or the toxic environment in Sacramento? It’s likely a combination of both. Now close to his hometown of Mobile, Ala., Cousins gets a fresh start.

He’s instantly thrust into a playoff chase alongside Anthony Davis. The two are undoubtedly the best one-two combination of big men in the game today. It isn’t often a team can add an elite player (approaching his prime) averaging 27.8 PPG, 10.6 RPG, and 1.3 BPG without having to give up too much. Yes, Buddy Hield was drafted No. 6 overall in last year’s draft. However, if New Orleans thought they had a budding star (no pun intended), it probably wouldn’t have traded him for such a volatile individual.

While there may be logistic problems as to how Davis and Cousins will be used at the same time, it’s a move New Orleans had to make. The Pelicans are much better than they were pre-trade. It will now be fascinating to see whether NO can resign Cousins at the conclusion of his contract next season.

Houston did well to land the likely 6th Man of the Year in Lou Williams. Williams averaged 18.6 PPG off the bench this year for the Lakers. He’s excellent at creating his own shot – something the Rockets collectively struggle with outside of James Harden. Williams – much like Harden – also is very adept at getting to the line.

Houston relinquished little-used Corey Brewer and a 2017 first-round pick in the deal. Being a contending team, the draft pick means little to the Rockets – especially since it will be in the late 20’s. Williams’s contract was also a major coup for general manager Daryl Morey. He will be under contract for another season – at only $7 million. Not only did Houston strengthen its bench immensely, but it also added a player capable of helping out Harden in crunch time as it pertains to scoring the basketball. The Lakers made minor moves from a personnel standpoint.

For as good as Williams is, he was never going to be part of the future. Los Angeles did well to snag a first-round pick for him in a loaded draft. It can be used as an asset in a potential trade, or in terms of selecting a promising player.

However, the gigantic news arose when Team President Jeanie Buss opted to fire her brother, Jim, and General Manager Mitch Kupchak in order to bring in Magic Johnson as the new President of Basketball Operations.

This move is significant in a number of ways. We’ve been waiting for Toronto to make a power move the last few seasons, and they finally pulled the trigger with the addition of Ibaka.

This move makes a lot of sense for Dwane Casey’s team. Ibaka will slot in to the starting lineup right next to Jonas Valanciunas. He certainly makes the Raptors bigger, longer, and more athletic up front. The move will push Patrick Patterson to the bench – effectively strengthening the second unit.

Ibaka’s ability to stretch the floor will give Toronto an added dimension it previously did not have. Bigs guarding Ibaka will have to float out to the perimeter. This should help to open up driving lanes for both Kyle Lowry and DeMar DeRozan. He’s proven defensively to also being a solid shot-blocker. Ibaka also brings big-time playoff experience to the Raptors’ roster and should be motivated now playing for a contender.

Right before the trade deadline, Toronto also acquired P.J. Tucker from Phoenix. The defensive-minded swingman is tough as nails. While he won’t put up gaudy stats, he’s the sort of guy you want on your team come playoff time. Tucker is an excellent defender with oodles of energy.

Will these two moves enable Toronto to take down Cleveland? We don’t know the answer to this question yet, but the Raptors do appear more equipped to challenge the Cavs in a more serious manner – especially with Cleveland displaying a few cracks in the proverbial foundation. Sam Presti is one of the league’s best general managers – and he proved this once again on Thursday.

OKC strengthened its bench immensely with the additions of Doug McDermott and Taj Gibson from the Chicago Bulls. This may have been (outside of the Cousins deal) the biggest fleece job of any move this season. The Thunder gave up underwhelming PG Cameron Payne, journeyman Anthony Morrow, and Joffrey Lauvergne.

Gibson is a terrific defender with the ability to stretch the floor from the perimeter. “Dougie Buckets” – as he’s affectionately been referred to – can score in bunches. He’s battled some injury issues with the Bulls, but he certainly possesses the ability to put up points in a hurry.

Without question, OKC strengthened its team as it looks to face a tough first-round matchup – likely against San Antonio or Houston. With the Cavs suddenly looking vulnerable, this was the time for general manager Danny Ainge to capitalize.

Ainge’s shrewd dealings over the years have netted Boston tons of picks. These assets – including Brooklyn’s first-round pick this year – would be used to add to an already impressive core featuring Isaiah Thomas, Al Horford, Jae Crowder, and Avery Bradley.

With Butler and George rumored as options, the Celtics were unable to make any moves. Landing George in particular would’ve put a ton of pressure on Cleveland. Alas, the choice to stand pat may hurt them down the line in the playoffs. At this point, we shouldn’t be surprised.

Sacramento is the most dysfunctional franchise in the NBA. It’s become a wasteland for any talent headed to California’s capital city. Trading Cousins certainly wasn’t an easy decision. With that said, it netted them essentially Buddy Hield and a first-round pick. It’s thought that Sacramento will buy-out both Tyreke Evans and Langston Galloway.

While they weren’t going to get equal value for Cousins, couldn’t they have gotten a better package? Well, yes. According to GM Vlade Divac, the Kings had received a better offer two days prior to pulling the trigger on the trade with New Orleans.

Owner Vivek Ranadive said Hield has ‘Steph Curry potential.’ Incidentally, he had been telling Hield himself that the Kings were planning on getting him…while he was still a member of the Pelicans earlier this season.

The Kings did win their first game in the Hield era by a score of 116-100 over the Denver Nuggets. Hield had 16 points and 6 rebounds on 6-of-10 shooting. Maybe Ranadive knows something we don’t. Philly made a couple of moves at the deadline. One (Ersan Ilyasova for Tiago Splitter, second-round pick) was essentially a salary dump. The second (Nerlens Noel to Dallas for Andrew Bogut, Justin Anderson, first-round pick) was a bit curious.

It’s likely Bogut will be bought out by the Sixers. Anderson doesn’t appear to be an impact player. The first-round pick is top-18 protected. Essentially giving Noel away for little seems peculiar. While there are questions as to how he’ll fit with Joel Embiid, Noel has proven to be a very good shot blocker. At only 22, his best basketball is ahead of him.

The former UK player is slated to become a restricted free agent this summer. With a litany of big men already on the roster, it didn’t seem like Noel figured into the long-term plans. With that said, Noel was still a commodity worth exploring further. The Bulls did opt to keep Butler. This was a big question heading into the deadline period. As for now, it appears Chicago will build around the former Marquette star.

As for the trade Chicago did make…it was interesting.

Both Gibson and McDermott had been core players the past few seasons. Chicago traded for McDermott during the 2014 draft. While he’s certainly not what anyone would call a great defensive player, he certainly can score. Gibson was a high-character guy for the Bulls, and was one of their better defenders. He is set to become a free agent, but Gibson certainly had value as a potential returning piece.

For two solid assets, Chicago essentially ended up with Cameron Payne – a former first-round pick with little to show thus far in his early career. Payne is one of the league’s worst shooters. For players averaging at least 16 minutes a game, his 40.2-percent shooting percentage is the second-worst in the league – only ahead of Miami SF Justise Winslow. 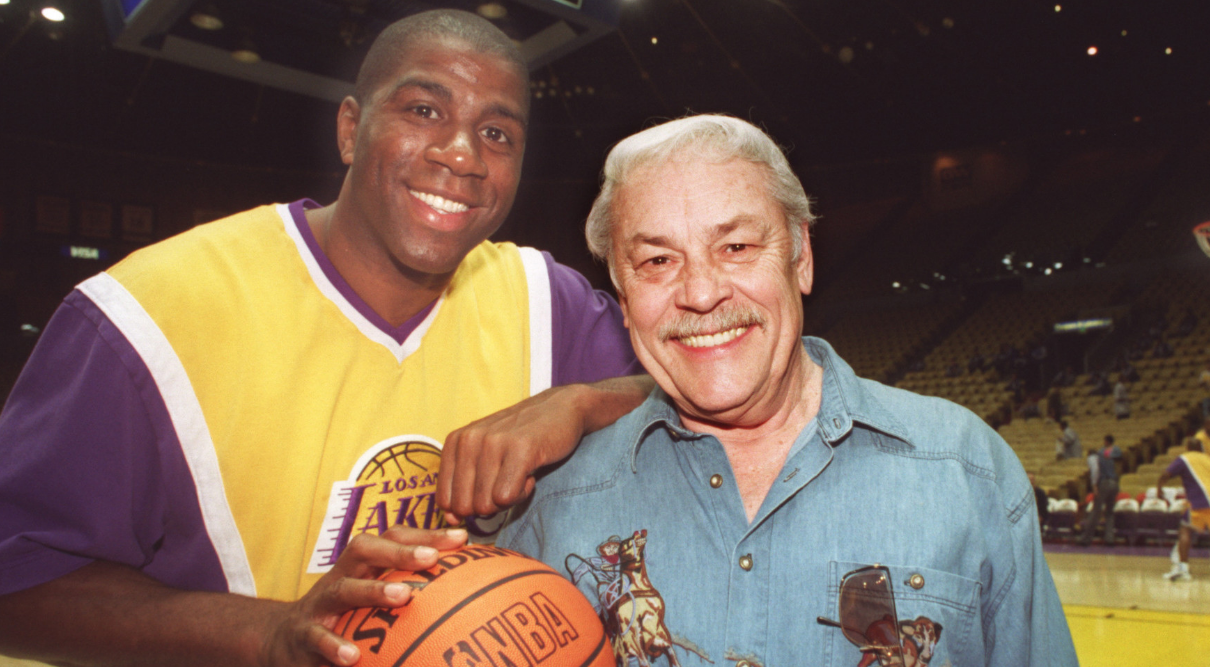 History With Dr. Jerry Buss and Lakers Will Drive Magic Johnson To Success