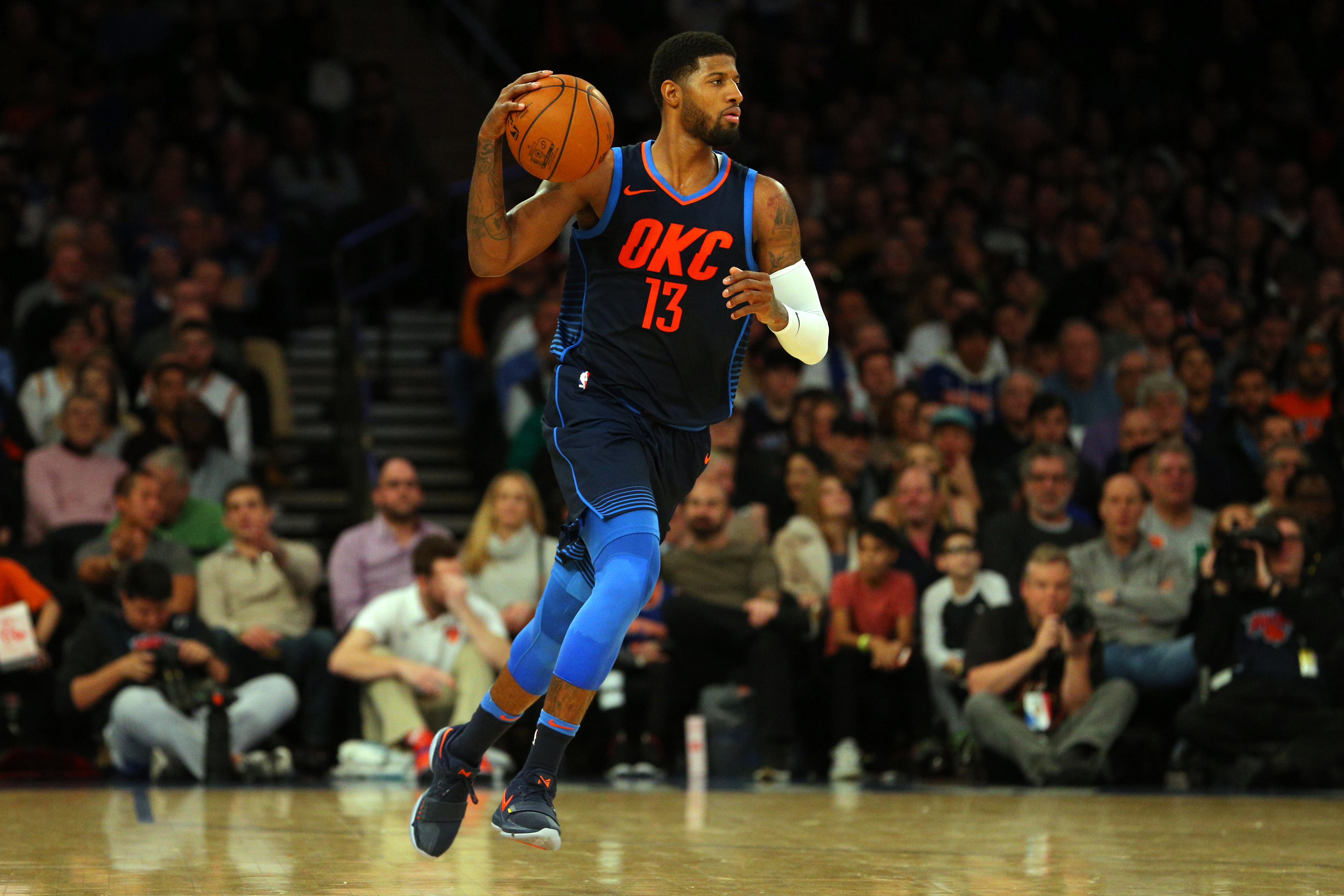 Paul George is back in LA.

No, not as a member of the Los Angeles Lakers — but instead with the Oklahoma City Thunder. That’s not to say, however, that we won’t see George in the purple and gold this time next season.

On Wednesday night, George and the Thunder will square off versus the Lakers in Staples Center. It marks the first trip back home for George since being traded to OKC in the offseason.

A native of Southern California, George has long been rumored to be driving a return back home next season. It’s essentially been the NBA’s worst-kept secret for over a year. The Lakers — starved for a big-name player — have ample cap space heading into this upcoming offseason. The plan all along has been for Rob Pelinka and Magic Johnson to go full bore into free agency strapped with enough cash to sign two max free agents.

Though the Lakers may be a ways away from contending for anything of consequence, George could — in theory — be a piece capable of getting them over the proverbial hump.

Well…we aren’t so sure about that.

Before we delve into why, we’ll take a step back into the tampering charge put forth by George’s former team (Indiana) against the Lakers. The Lakers were fined $500,000 after evidence concluded some form of contact between George’s agent and Pelinka.

Paul George on Lonzo Ball: “As far as being a basketball player, at his age, he’s one of the best basketball players that has played this game. He has a knack to play the game the right way.”

Brian Shaw — a current Lakers’ assistant coach and former associate head coach with George in Indiana — has consistently stayed in touch with the 4-time All-Star. The two share a love of fishing, and often spend time with each other during the offseason in Los Angeles.

Prior to the contest, George had this to say about the alleged contact between himself and Shaw (as it pertained to basketball tampering):

“They thought it was tampering. There was no tampering at all. It was kind of crazy. Our relationship, myself and [Shaw], was far more stronger than the team’s, me coming to the Lakers, was. B-Shaw has been a mentor for me, so it was kind of comical. The Pacers thought there was more depth, of him trying to recruit me. It wasn’t. The only thing me and B-Shaw ever spoke about was fishing. We challenge each other on fishing trips. B-Shaw has way, way better class than trying to recruit me.”

Where there’s smoke, there’s considerable fire. The Lakers are determined to sign a max player during the month of July. After striking out brutally hard in the past few offseason periods, the new braintrust of Pelinka and Johnson are determined to make sure this won’t occur.

Assuming George does indeed sign with the Lakers, it’ll be interesting to see how he figures into the plans. The team has long been interested in also acquiring LeBron James — though we’re skeptical as to why he’d ultimately come to Los Angeles from a basketball standpoint. We’ll assume he won’t be in the fold next season.

As for the current roster, the Lakers will likely relinquish the contracts to both Brook Lopez and Kentavious Caldwell-Pope. We know Lonzo Ball will man the point. An improved Brandon Ingram and an emerging Kyle Kuzma also figure to be fixtures within the starting five. With those three, George fills a glaring need: Shooting.

On the year, he’s shooting a career-high 43.0-percent from beyond the arc. The Lakers — on the other hand — are at the very bottom in both three-point percentage and makes. George’s versatility would enable him to slot in at shooting guard, and both forward spots.

His ability to run the floor in transition would work exceptionally well with Ball’s propensity to push the ball. One would think George could be the recipient of many wide-open looks by camping out at the three-point line.

A George-Kuzma-Ingram trio would make life difficult for opponents in a number of areas. Defensively, all three could switch in any potential pick-and-roll situation. All are mobile and athletic enough to defend multiple spots on the floor. Duly, there aren’t a lot of teams fielding three 6’9″ athletes within the 2-4 positions. It’ll create some mismatches by default — something head coach Luke Walton likely will want to exploit.

With the remaining cap space, the Lakers will need to get a center. The options aren’t overly plentiful on the open market. DeMarcus ‘Boogie’ Cousins is the big fish in this scenario. DeAndre Jordan also may be available should he not exercise a $24.1 million player option. However, neither one of them are a slam dunk by any stretch of the imagination. If George enters next season as the Lakers’ number one option, is this team a playoff team?

Does the addition of George make the Lakers a true contender in the Western Conference?

The answer is a resounding no.

Those ardent supporters of the purple and gold need to operate with some rationality. George — albeit supremely talented — is not an alpha out on the court. He defers more than most superstars do, though this isn’t a negative. George is an underrated passer, and won’t go hunting for a shot. He plays within the offense and often looks to move the ball. This would make him an ideal fit for what Walton is attempting to do.

However, George won’t be the savior ready to launch the Lakers back instantly to title contention. He’s essentially a perfect No. 2 option on a very good team. For Los Angeles to be considered among the best in the West, another move must be made in addition to the hypothetical signing of George.

Whether that’s via trade or a signing (James, Cousins) we simply don’t know. Nonetheless, moves have to be made in order to ensure a positive trajectory going forward for a franchise without a playoff appearance since 2013.

An Early Look At The Loaded 2018 NBA Free Agent Class