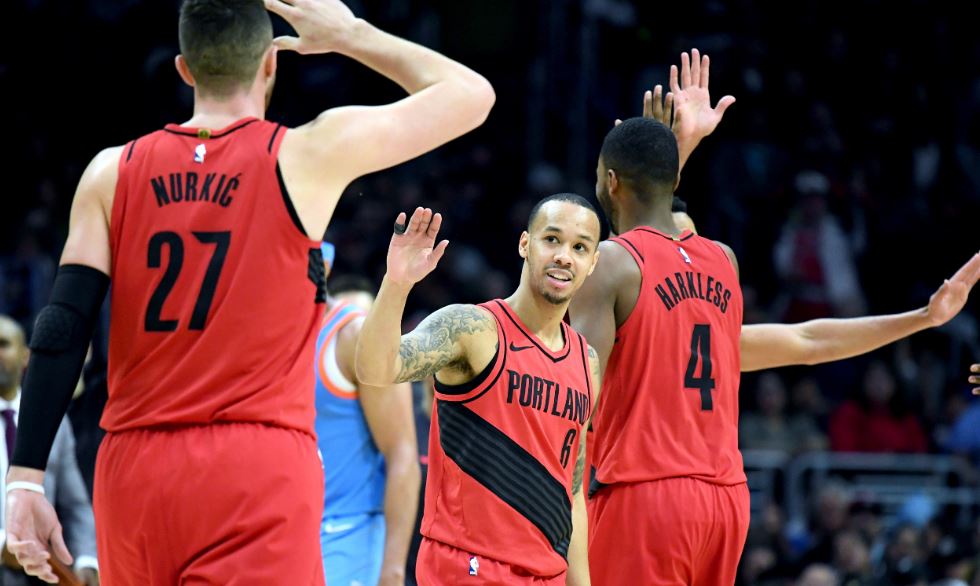 The Portland Trail Blazers (49-33) took sole possession of the third seed in the Western conference Wednesday night, defeating the Utah Jazz by a score of 103-92. Game 82 had all of the elements Portland’s wins usually do: offensive explosions from the starting backcourt, rebounding up and down the roster, and stifling team defense.

The Blazers will have home-court advantage in the first round, a far cry from last year’s easy exit via the eventual champion Golden State Warriors. They’ll host the sixth-seed New Orleans Pelicans (48-34), who they split the season series with. Portland will lean on its depth – something the Pelicans cannot match.

Portland has plenty of key rotation pieces, but their postseason hopes start with their studly backcourt duo of Damian Lillard & C.J. McCollum. The tandem took over 40% of the team’s total shots, and are the only duo in the top 10 in last-minute field goals made this season. They’re the engine that’s powered this team into perennial playoff contention – a pair of flamethrowers that shoot the three at elite rates.

Under the playoff lights though, no two men can have all that power. Here are the other four guys who must step up for Portland to make a deep playoff run: Nurkic pushed Portland into the playoffs last year after a trade from Denver produced inspired play down the stretch. The big fella boasts a beautiful shooting touch that extends from the rim to the mid-range, and he is a crafty passer as well. Look for him to initiate pick & rolls above the foul line, resulting in an unlocked floor for his teammates.

The x-factor for Nurkic will be his defense. He had 4 blocks against Utah, battling against talented bigs Derrick Favors and Rudy Gobert. However, New Orleans’ Anthony Davis is a different beast as the go-to player in the Pelicans’ offense. In the two full games Davis played against the Blazers this season, he had 36 points in both. Aminu attempted nearly 100 more threes than twos this season while averaging over a steal and an assist per game. He attempts five threes per contest, a key release valve that opens up the floor for Lillard and McCollum. Portland needs Aminu to catch fire beyond the arc and make sure whoever he’s guarding doesn’t.

An excellent individual defender, he has the length to challenge the league’s best scoring wings and tenacity to match. He’ll be tasked with helping on Anthony Davis and crashing the glass hard. Aminu trails only Nurkic in rebounds and back-up guard Shabazz Napier in steals, showing his ability to affect the game in all categories defensively.

Look for Aminu to bang out triples on passes from the aforementioned pick and roll, as shown here during a late-season duel with Houston. If he fires from the corner, you might as well count it: Aminu shot nearly 47% on corner threes this season. Turner is the lone Blazer that attempts threes but doesn’t make enough of them (31% on the season). He has the second most assists on the team and is content to make his living in the mid-range, where he shoots 45%. One of my favorite things Turner does is post up other guards. He’ll do it at the end of the clock or on the break, unleashing jump hooks, turnarounds and passes to shooters whose defenders dared to help. Both Turner and Napier provide capable ball-handling, but in different ways. Napier leans on explosive dribble moves and speed, while Turner chooses to embody John Wooden’s old saying: “Be quick but don’t hurry.” Napier made his case for Most Improved Player this season, ascending to an important reserve behind Lillard and McCollum. He’s an energetic pest, a 37% three-point shooter and a burst of energy whenever Terry Stotts feels the Blazers are lagging. In the first round, he’ll have to go shot-for-shot with Pelican scorers E’Twaun Moore and Ian Clark.

Napier’s the most fun when he’s on a scoring streak. His hot hand can shift the game Portland’s way, as it did in this December victory over the 76ers.

While much of this series will come down to Portland’s ability to limit Anthony Davis, the Trail Blazers boast too much firepower/depth for the Pelicans to keep up with. Between the Lillard-McCollum duo, the aforementioned four role players, and an ever-raucous Moda Center crowd, Portland should have no problem advancing to the second round.