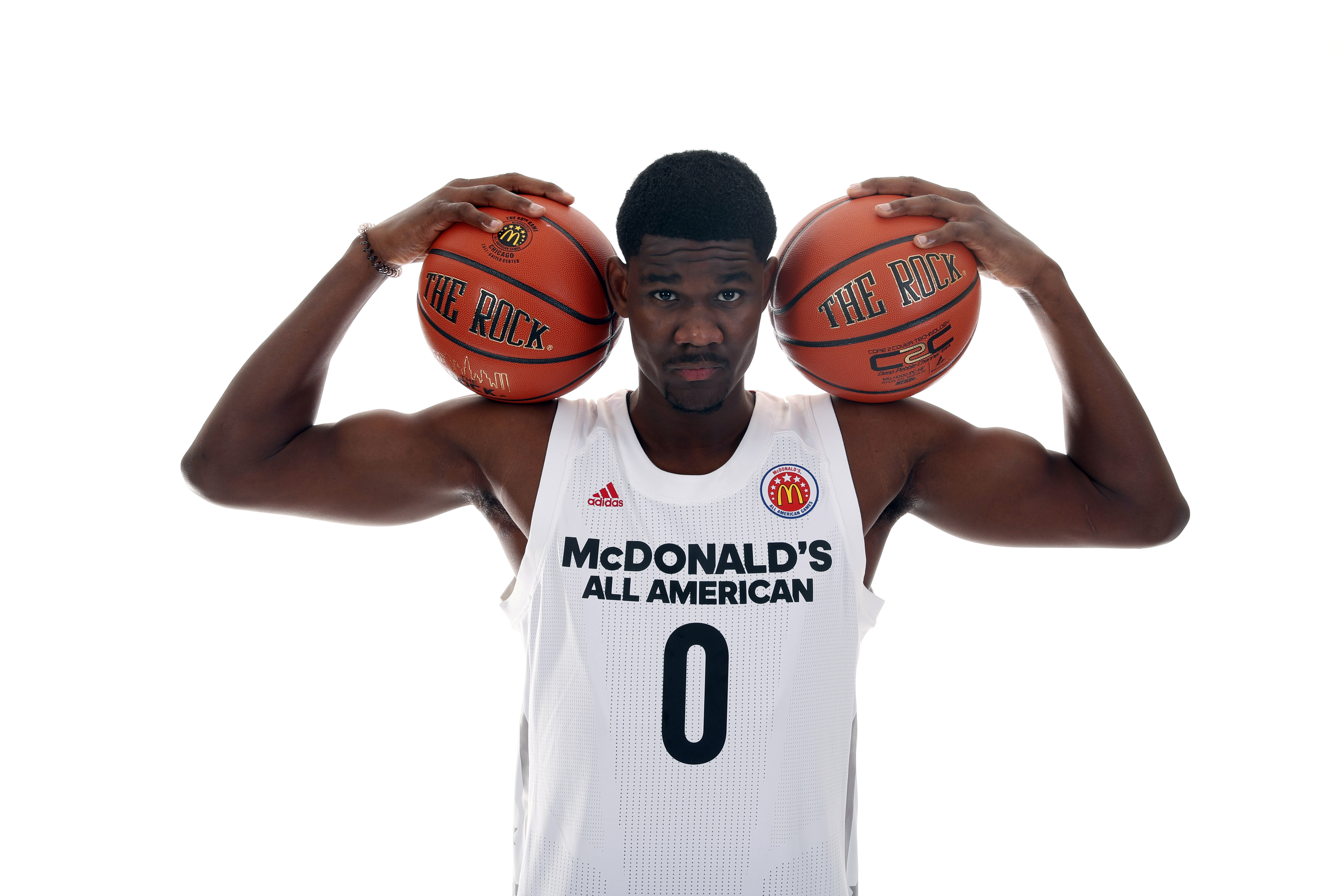 While the 2017 NBA Draft garnered an immense amount of hype, the 2018 version could be even better.  There are five draft-eligible players with the talent to truly transform the fortunes of a franchise: Michael Porter Jr., DeAndre Ayton, Marvin Bagley, Mo Bamba, and Luka Dončić.

We haven’t had any public declarations as to whether the quintet will turn pro — though it’s a safe bet to assume that we’ll see each of the aforementioned five donning an NBA hat during next year’s draft night.

We will break down each player — analyzing their respective strengths and weaknesses:

Ayton first garnered attention as a 12-year-old. Standing at 6’5″, scouts were blown away by his agile nature. Ayton left his native Bahamas for San Diego — where he ultimately developed into one of the best prep players in the United States.

There’s a lot to like about his game. For one, Ayton is far from a lumbering type. He’s fluid with his movements, and virtually glides on the court when compared to his peers at the position. His ball skills for a big man are also immensely impressive. In this clip below, Ayton does a tremendous job of surveying the defense before making the assertive decision to shoot the basketball:

As the clip proceeds forward, Ayton’s vision gets tested once more. He takes on the double-team before finding a teammate open under the basket. Ayton’s ability to comprehend the opponent’s defensive scheme is far more advanced in comparison to other college freshmen.

At 7’1″, Ayton possesses touch both around the rim and from beyond the arc. It makes him a highly difficult player to defend against. It will be fascinating to see how he ultimately develops. There’s certainly room for improvement in terms of becoming more polished with post moves. Duly, Ayton has a tendency to get a bit too perimeter-happy. While he can spread the floor, much of his value will come down low.

Bagley forced his way into college action after graduating from high school a year early. Though he will be younger than most of his peers, Bagley will be just fine when it comes to the competition.

Possessing a wiry frame, Bagley is a nightmare in the open floor. It may sound funny to describe a 6’11” forward as such, but Bagley is a potentially transcendent player. There have been countless times throughout his prep career in which he’s transitioned from grabbing the rebound to pushing the ball up the court. Bagley can handle the ball decently well — especially considering his frame. He likely won’t be asked to do this a ton on either the collegiate or professional level, but it’s a skill worth exploring nonetheless.

In this clip, Bagley utilizes his quickness to impressively blow past a smaller player during one of Duke’s exhibition games:

There’s no question Bagley will have to get stronger — though this shouldn’t be a problem as he continues to physically mature. One would also hope to see Bagley’s handle get a bit tighter. Assuming he stays consistent with his perimeter shot (which extends out to three-point range), you’re looking at a very dynamic athlete. Bagley’s versatility should translate quite well on the next level.

Pro comparison: A mixture between Chris Bosh and Lamar Odom

Bamba may not be as well-rounded as the others within this piece. However, he possesses one undeniably elite trait: Shot-blocking prowess.

The New York City native has a whopping 7’9.5″ wingspan. To put that into perspective, Bamba has a longer wingspan than that of Rudy Gobert (7’8.5″), Kareem Abdul-Jabbar (7’5″), Wilt Chamberlain (7’8″), and Shaquille O’Neal (7’7″). Bamba’s mere presence around the rim will result in an uptick defensively for any team lucky to draft him.

He’s no slouch on the offensive end either, as seen below:

Bamba — like Ayton and Bagley — can stretch the floor exceptionally well. He’s also sneaky-good in terms of dribbling the basketball in traffic. Bamba’s above-average athletic ability enables him to leap off the ground rather quickly. He’s also terrific in transition — as he is very capable in running the floor.

There will be a major adjustment period for Bamba as he transitions towards the professional ranks. At this point, he’s woefully thin. He’ll need to enter a major strength and conditioning program for gains in mass and overall strength. Bamba would simply get pushed around under the basket at his generously listed weight of 220 pounds. Assuming he can put on good weight and retain his impressive athleticism, Bamba has the chance to be an absolute terror on the defensive end.

Pro comparison: A taller Nerlens Noel with a perimeter shot

Dončić has been well known in NBA circles for years. A prodigy within the sport, Dončić has been playing professionally in the Spanish Liga ACB since he was 16 years of age. This is quite a feat — considering Liga ACB is widely regarded as the second-best professional basketball league in the World behind the NBA.

In these two clips, we see the 18-year-old stepping back for a silky jumper — as well as a lethal drive to the cup:

Dončić unsurprisingly has a maturity level unparalleled with anyone in this class. He’s competed — and thrived — at the highest level possible for a player of his age. Plying his trade against professionals on a daily basis has cultivated Dončić’s competitive spirit. He plays the game with an edge and aggressiveness not traditionally seen with European players.

From a skill standpoint, the 6’7″ guard has unbelievable vision. His frame enables him to peer over opposing defenses. Dončić is then able to uncork passes from all angles. Simply put, he knows how to play the game. Dončić won’t wow anyone with athletic ability. He may struggle initially to beat NBA wing athletes off the dribble. With that said, he’s a savvy enough player to make alterations to his game.

Similar to Lonzo Ball, his unique set of talents may be best geared towards a specific franchise hoping to usher in a culture change. There’s no doubt his intelligence, craftiness, and play-making abilities make Dončić an exceptional prospect.

Pro comparison: An amalgam between Joe Johnson and Ricky Rubio

Porter may ultimately be the headliner in this year’s class.

The 6’10” forward resembles a gazelle as he runs the court. Porter’s coordination is simply superb — as he can stop on a dime to drill a 25-footer just as easily as he can throw down a thunderous dunk in traffic. Porter possesses elite-level athleticism, though it’s controlled in an impressive manner. He can fill it up from anywhere beyond the arc with relative ease. Porter’s quick and clean shot pairs nicely with an attack-minded game off the dribble.

Though Porter can score with the greatest of ease, he’s also an adept and unselfish passer (as shown below):

In the current NBA, wing players are tasked with not only scoring the basketball, but also defending at a high level. Porter isn’t a tremendous defensive player — though he’s got all the traits needed to one day be a very good one.

Selecting Porter at the very beginning of this draft could be a monumental decision for one team. He’s known as a very hard worker, and as a person rooted in character and class. As a potential ‘face of the franchise’, Porter truly is that special.