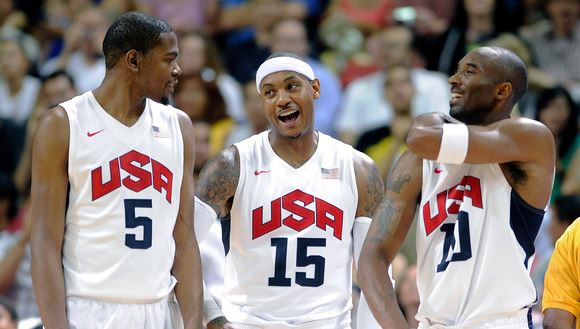 The moment the Oklahoma City Thunder were eliminated by the Golden State Warriors in the Western Conference Finals, the Kevin Durant Sweepstakes officially began. With Durant being the most sought-after free agent since LeBron James in 2010, plenty of teams are lining up to make their pitch to the former MVP.

While sources indicate Durant has only scheduled meetings with the Thunder, Warriors, San Antonio Spurs, Miami Heat, Los Angeles Clippers and Boston Celtics, none of these teams were the first to pitch their organization to Durant.

That distinct honor belongs to Carmelo Anthony, who has already spoken with Durant about joining the Knicks while participating in Team USA activities. While franchises can’t officially speak with Durant before 12:01 am on July 1, there is no such rule when it comes to player-to-player interactions.

When asked on the matter, Anthony said, ‎”You know, for me, it’s more just about just laying it all out for him” and “giving him the real.”

Anthony also acknowledged Durant’s looming decision is one he can relate to:

“Being in that situation before and knowing how much he has to think about‎ and what he has go through, him not wanting to leave Oklahoma ‎[after] all the time that he spent there, ‎I felt the same way when I was in Denver, spending 7½ years there and then to have to make a decision‎. But you leave it up to him. He’s going to make the best decision for him. I think that’s the most important thing‎.”

The Knicks recently traded for another former MVP in Derrick Rose, and could offer Durant a strong supporting cast of Rose, Anthony and Kristaps Porzingis. However, Durant made it clear he wants to win titles immediately, which doesn’t seem likely with a Knicks squad that hasn’t made the playoffs since 2014.

Whether or not the Knicks secure a sit-down with Durant on July 1 remains to be seen, but it’s clear Anthony’s decision to compete in the 2016 Olympics is already paying dividends.