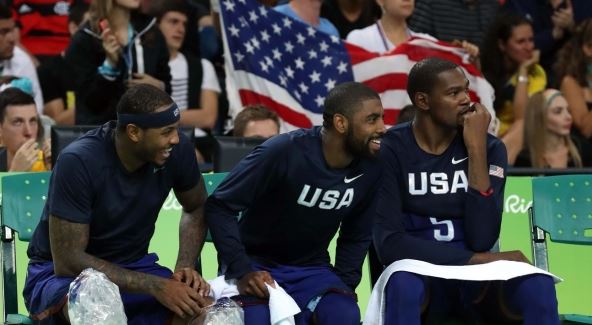 The United States wasn’t supposed to have competition at this year’s Olympics. Spain and France, the two teams considered by many to be the biggest threats to an inevitable Team USA gold medal, have gone a combined 2-3 in the group stages. On the contrary, Team USA beat their first two opponents, China and Venezuela, by a combined 101 points.

However, none of this fazed Team Australia heading into their bout with the heavily favored Americans.

Team USA came out looking a bit better in the third quarter, but were still lethargic on defense. Entering the fourth quarter with a slim three-point lead, it soon became the Kyrie and Carmelo show. The duo combined for 26 of the team’s 28 points in the final quarter, capped off by an Irving dagger eerily similar to the three-pointer he sank in Game 7 of the NBA Finals, putting Team USA up seven with 90 seconds to go.

The United States looked out of sorts all game despite winning 98-88, struggling to move the ball (17 assists) and only finishing with three players in double figures (Anthony, Irving, Durant). The vaunted defense allowed Australia to shoot 50 percent from the field, while they shot an abysmal 39.1 percent.

If anything, the game served as a serious reality check for a team many considered a lock to capture the gold medal. The international win streak for Team USA now moves to 71, but if they have another performance like this one, they’re simply asking for it to be broken.