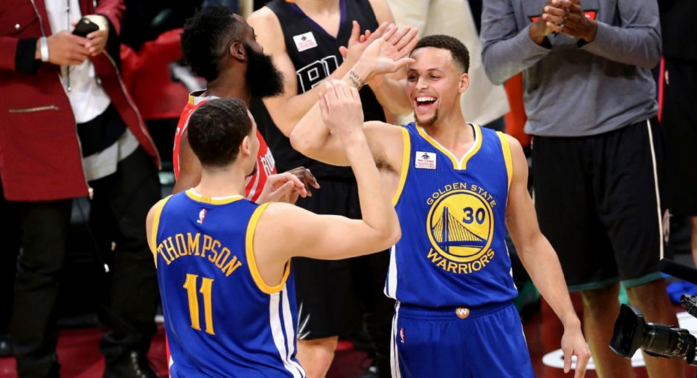 Before the epic aerial display performed by Zach LaVine and Aaron Gordon, The Splash Brothers warmed up the Toronto crowd with a shooting showdown of their own.

Much like last year, the 3-Point shootout—actually more hyped this year than the dunk contest prior to the festivities—satisfied the crowd with a final round consisting of the best shooter/player in the game vs. his All-Star teammate, who also happens to be the second-best shooter on Earth.

After Steph’s final round 23 (the highest score of the night to that point), Klay Thompson finished the night with his best round, dropping 27 points, including a clutch 5-for-5 on the all-Money-ball rack to seal the victory.

As for the other contestants, Suns rookie Devin Booker also made it to the final round, which is pretty impressive for a 12-year old (ok, 19). James Harden looked predictably uninspired and kind of thinking about something else, and C.J. McCollum shot an air ball that missed the rim by at least a foot long and right.

Emblematic of the 2015-16 NBA landscape, and for the second year in a row, in the Three-Point Shootout, the Warriors are just on a level above everybody else.