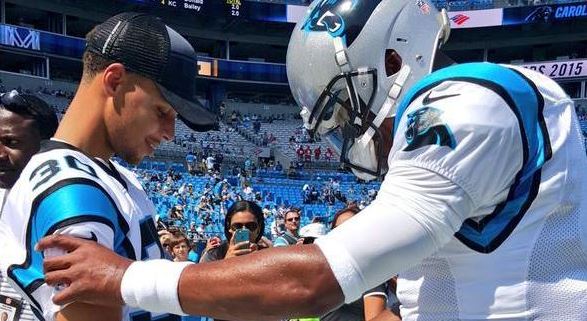 Stephen Curry’s two favorite teams are a combined 30-0 this season. Even though he only has an active role with the Warriors (19-0), the Charlotte native has not hidden his love for the 11-0 Carolina Panthers.

As both teams aim to stay perfect, Curry surprised many when he asserted his Golden State squad would be the first to lose. At first thought, the comment seems insane. The Warriors are outscoring teams by 15.3 points per game and have been absolutely dominant, while many are calling the Panthers the weakest team to start 11-0 in NFL history.

First of all, the Panthers play far less often and therefore have less exposure to losing. With games against the decrepit New Orleans Saints and crumbling Atlanta Falcons the next two weeks, Carolina is in no real danger of dropping a game until December 20th against the New York Giants. In that time frame, the Warriors have eight games (six on the road) and will need to be 27-0 to keep even with the Panthers.

That’s not to say the Warriors won’t stay perfect, but their road is certainly more difficult. Playing three-to-four times a week against teams giving it their all is a difficult task to match night-in and night-out. With all 29 teams hoping to hand Golden State their first loss, they don’t have the luxury of studying game film for one week to prepare for opponents like Carolina does.

No matter which team loses first, both squads certainly deserve high praise. The Warriors are well on their way to beating the 1995-1996 Chicago Bulls for the best regular season record in NBA history (72-10), and the Panthers still have a chance to be the first ever team to finish 19-0.

If Carolina enters Super Bowl 50 on February 7th with an 18-0 record, the Warriors would need to be 50-0 to keep pace. I don’t see either one happening, but I’ll side with Curry on this one and say the former is much more likely.