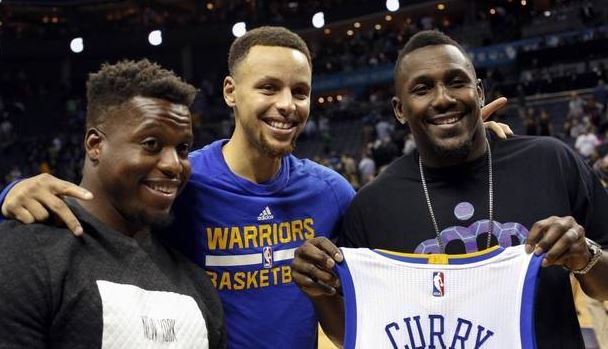 Spending most of his life in Charlotte, North Carolina, Golden State Warriors point guard Stephen Curry has not hidden his love for the Carolina Panthers. After winning his first ever NBA Championship last June, Curry is thrilled to see his favorite football team one win from capturing the Lombardi Trophy.

At a news conference announcing details for the Warriors’ new stadium that is being constructed, Curry had plenty to say about Super Bowl weekend. The Golden State Warriors take on the Oklahoma City Thunder on February 6, and Super Bowl 50 between the Denver Broncos and Curry’s beloved Carolina Panthers will be played the next day.

It’s hard not to take Curry for his word, as Golden State and Carolina are a combined 59-5 on the season. With the Warriors currently on a 40-game regular season winning streak at Oracle Arena and the Panthers looking unbeatable en route to their Super Bowl berth, both teams look primed to follow through on Steph’s guarantee.

With his two favorite teams both absolutely dominating their respective sports, it’s clear Curry is the good luck charm. Having made it known in the past that he is a die-hard Boston Red Sox fan, we can save time and pencil them in as 2016 World Series Champions.