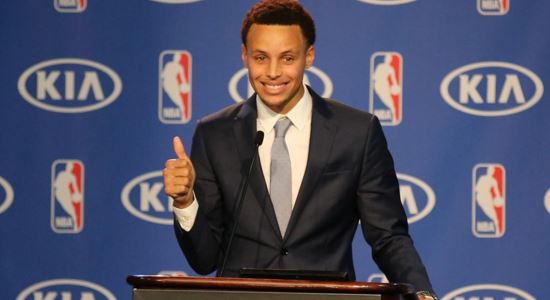 To the surprise of virtually no one, Stephen Curry will be named MVP for the 2015-2016 season according to league sources. He is the 11th player in NBA history to win the prestigious award in consecutive seasons. Curry averaged 30.1 points, 6.7 assists, 5.4 rebounds and 2.1 steals per game while leading the Warriors to an NBA-record 73 wins this season.

After bursting onto the scene last year en route to an NBA title and MVP, Curry was even more dominant this season. In fact, there were plenty of experts who considered him for the Most Improved Player Award as a result of his unprecedented leap in efficiency.

The Baby-Faced Assassin posted career highs in points, rebounds, steals and field goal percentage, and finished with the 8th highest Player Efficiency Rating (31.56) for an individual season in NBA history.

There was little doubt that Curry would win the award, as the only intrigue left was the margin of victory. No MVP has ever won the award unanimously, but Curry appears to have a legitimate shot. While Kawhi Leonard, LeBron James, Russell Westbrook, Kevin Durant and Chris Paul are expected to compete for runner-up honors, Curry was in a class of his own for the entire season.

Curry became the first player to ever average more than 30 points per contest while playing fewer than 35 minutes per game. And at only 6-foot-3 and 190 pounds, Curry’s scoring is even more impressive when accounting for his slight build. His dribbling, movement off the ball and shooting touch make him a dominant scorer the NBA has never seen before.

But for as great as the personal accolades are for Curry and the Warriors, their attention is squarely focused on their current postseason series with the Portland Trail Blazers.

Winning back-to-back MVP awards is certainly an incredible accomplishment for Curry, but he’d be the first to call this season a disappointment if the Warriors don’t also win back-to-back championships.