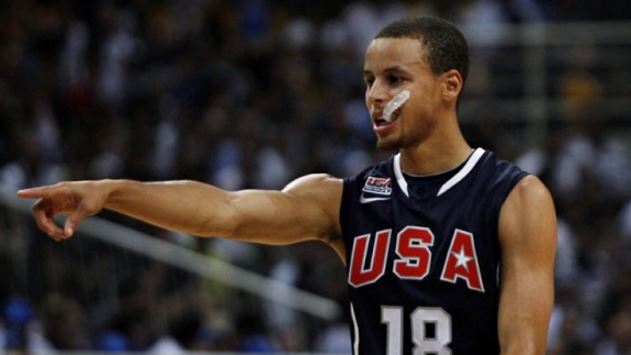 2-time MVP Stephen Curry is two wins from a second consecutive NBA title, but will have to wait four more years before crossing another major goal off his list. On Monday, the Baby-Faced Assassin announced that he will not compete for Team USA at the 2016 Olympics in Rio de Janeiro.

Curry has competed at world competitions for the United States, but has never played in the Olympics. That streak will continue until at least 2020, as the Warriors’ point guard released this official statement:

“After a great deal of internal thought and several discussions with my family, the Warriors and my representatives, I’ve elected to withdraw my name from the list of eligible players on Team USA’s preliminary roster for the 2016 Summer Games in Brazil. I recently informed Jerry Colangelo of this decision. My previous experiences with USA Basketball have been incredibly rewarding, educational and enjoyable, which made this an extremely difficult decision for me and my family.”

The statement continued, “However, due to several factors — including recent ankle and knee injuries — I believe this is the best decision for me at this stage of my career. It’s an incredible honor to represent your country and wear ‘USA’ on your chest, but my primary basketball-related objective this summer needs to focus on my body and getting ready for the 2016-17 NBA season.”

Curry joins Anthony Davis, Chris Paul and Blake Griffin as players who were expected to be significant contributors, but withdrew from Team USA consideration due to injury.

However, superstars like LeBron James, Kevin Durant, James Harden and Russell Westbrook are fully expected to represent Team USA in the 2016 Olympics, meaning anything less than a gold medal would be an enormous disappointment.