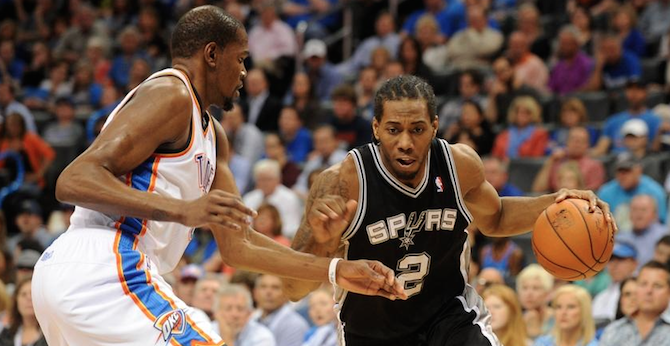 As has become typical of the NBA for the past two decades, hysteria encapsulates title contenders while the San Antonio Spurs quietly chug along. In this year’s edition, NBA fans are focused on Stephen Curry’s ankle, Kevin Durant’s impending free agency and LeBron’s ability to carry the Cavaliers to the promised land.

In the meantime though, the Spurs continue to do Spurs-like things.

Only 12 minutes into Game 1 of their Western Conference Semifinals series against the Oklahoma City Thunder, San Antonio was already up 23 points. By halftime, San Antonio extended the lead to 33, with Kawhi Leonard and LaMarcus Aldridge combining to outscore the entire Thunder team (45-40).

It was an absolute clinic by San Antonio as they showed off their full arsenal. Kawhi Leonard smothered Russell Westbrook to a 3-for-13 clip in the first half, and Danny Green contained Durant to a 5-for-14 effort through the first 24 minutes. The Thunder as a team shot 36 percent from the field and never found a rhythm.

On offense, the Spurs posted a staggering 73 points on 22 assists in the first half. San Antonio’s crisp ball movement was on full display as they carved up a helpless Thunder defense.

The second half proved to be much of the same, as the Spurs went on to win by 32 points. After the game, there wasn’t much for Durant or Westbrook to say:

The Spurs clearly landed a haymaker in Game 1, but know they can’t take their foot off the gas pedal. In the Western Conference quarterfinals, the Thunder defeated the Dallas Mavericks by 38 points in Game 1, but then lost Game 2. Oklahoma City now has the nearly impossible task of trying to flip the script on an incredibly talented and well-coached Spurs squad.

Never say never, but we should know by now that Gregg Popovich and the Spurs will continue to do what they do best… win.