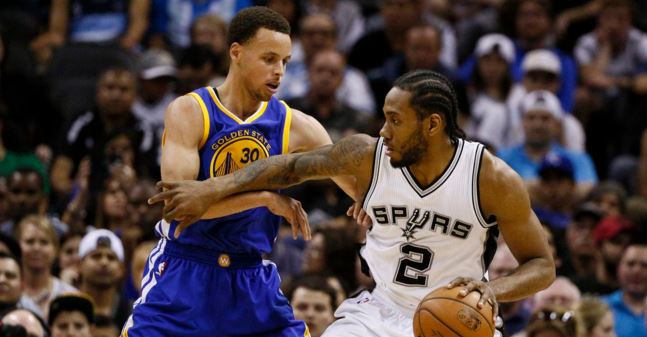 In what could be a preview of the Western Conference Finals, the San Antonio Spurs (59-10) defeated the Golden State Warriors (62-7) by a score of 87-79. The Spurs stayed perfect at home and did exactly what it takes to beat the reigning champs — play incredible defense.

The Warriors – who have not won in San Antonio since 1997 – didn’t get much help from MVP frontrunner Stephen Curry. The point guard was only 4-of-18 from the field and missed 11 three-pointers — he ended with 14 points as he was only 1-of-12 from behind the arc.

The rest of the Warriors couldn’t pick up the slack. Klay Thompson had just 15 points while Draymond Green did his best in an 11 point, 9 rebound, 8 assist performance. Golden State’s 79 points is their fewest since February 4, 2014.

As far as the Spurs go, their impressive performance provides hope that they can in fact compete with the Warriors. San Antonio is only three games back in the West for the No. 1 seed.

Home-court advantage could be more important this year than any other postseason in NBA history. The Warriors and Spurs are a combined 67-0 at home this season, with both squads showing no signs of slowing down.

Tim Duncan came off the bench for only the third time in his career, which led the Spurs to rely on the play of LaMarcus Aldridge. The power forward had 26 points and 13 rebounds — a huge improvement from his 5 point outing in the first matchup this season. Kawhi Leonard chipped in 18 points and 14 rebounds and Boris Diaw added 14 points, 8 rebounds and 2 assists.

Overall, the Spurs did exactly what it takes to bring down the formidable Warriors — shutdown the duo of Curry and Thompson. With two more matchups set to take place on April 7 and April 10, the No. 1 seed and huge NBA title implications will be on the line.