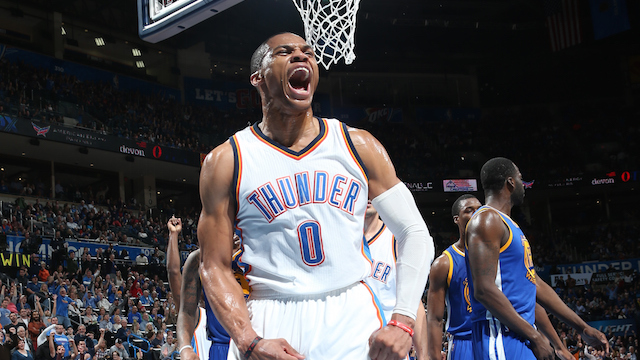 When you try to think of the closest comparison to Russell Westbrook, no one will come to mind. This is because there is no one in NBA history anything like him.

Westbrook reminded us of this in his most recent game when he and the Oklahoma City Thunder traveled to the nation’s capital to take on the Washington Wizards. If not for the impending free agency of Kevin Durant, this would have been just another game.

Durant injured his hamstring early in the game and never returned, which was the right course of action given his durability issues. As he has grown accustomed to doing recently, Russell Westbrook stole the show while leading the Thunder to a win.

Westbrook recorded a triple-double before the end of the third quarter, which would be absurd for anyone other than him. He became the first NBA player in the last 30 years to record 22 points, 11 assists and 11 rebounds in 28 minutes or less.

He’s so cool, in fact, that he doesn’t even need a nickname. By elevating his game and fashion sense to ungodly levels despite playing in one of the league’s smallest markets, he has become a global icon.

Kobe Bryant once said that he sees a lot of himself when he watches how hard Russell plays. But even the Black Mamba can’t replicate some of the thunderous flushes that Westbrook casually executes on a nightly basis.

The right question to ask here is, what on earth pissed off Westbrook this much that he feels the need to take it out on the rest of the league? He’s set to become a free agent in 2017, and there’s no question that all 30 teams will express interest in signing him to a max contract.

Proving more than capable of being a team’s star player, only time will tell if Westbrook’s dominance encourages Durant to stay, or pushes ‘The Durantula’ out of Oklahoma City.