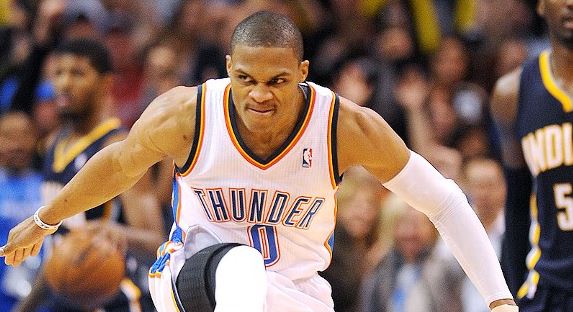 After leading the league with 17 technical fouls last season, Russell Westbrook has come to a brilliant conclusion – stop giving the other team one free point for emotional outbursts.

Over the summer, Westbrook said he went back and watched game film of each of the technical fouls he received, and noticed one similarity between each of them – his arguing didn’t change the call. Westbrook seemed disgusted with his behavior, saying, “I watched all my techs and all the dumb s— I was doing, so I decided to tell myself, there’s no need to argue. They’re not changing it, so move on.”

While Westbrook’s four technical fouls this season suggest he hasn’t totally learned to let calls go, the key is that he is making an effort to just play the game. It’s a valuable lesson, and one that could pay huge dividends down the line. When games come down to a single possession, it helps to not be handing the opposing team easy free-throws for temper tantrums.

This mindset is one Westbrook’s Western Conference foe, the Los Angeles Clippers, should try to adopt. With two players tied for the league-lead with 7 technical fouls (DeAndre Jordan, Blake Griffin), the Clippers have earned their reputation as the whiniest team in basketball.

As the Clippers and Thunder try to emerge from the brutally competitive Western Conference, avoiding technical fouls will certainly help their cause. But with the way the Golden State Warriors and San Antonio Spurs have been playing, both teams will need to improve in more than just the attitude area.