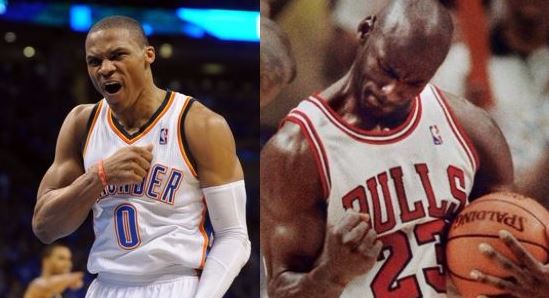 Oklahoma City Thunder star Russell Westbrook has had one incredible season. The point guard tied Magic Johnson’s record of 17 triple-doubles in a single season with his 13 point, 14 rebound, 12 assist performance against the Denver Nuggets on Tuesday night.

On Wednesday, Thunder head coach Billy Donovan decided to rest his 5-time All-Star in preparation for the postseason. But with three games left in the season, the former UCLA star has an excellent chance to break Magic Johnson’s incredible feat.

Westbrook, who should be in the conversation for MVP, is averaging 23.6 points, 7.8 rebounds and 10.4 assists per game this season. His athleticism has been impossible for teams to contain, and his squad is a perfect 17-0 in games he has recorded a triple-double.

The most triple-doubles Michael Jordan ever recorded in a season was 16 in the 1988-1989 season. That same year, Magic posted 17 triple-doubles while averaging 22.5 points, 12.8 assists and 7.9 rebounds. Johnson’s fellow Michigan State alum, Draymond Green, is second behind Westbrook with 13 triple-doubles this season.

The Thunder are hoping the former 4th overall pick can bring his hot streak into the playoffs. At 54-25, Oklahoma City is locked in as the No. 3 seed and will need all the triple-doubles Westbrook can provide if they are to make it out of the brutal Western Conference.

And with three games left before the Thunder’s postseason journey begins, it remains to be seen whether Donovan will give Westbrook the opportunity to break the record set 27 years ago.

No matter what happens in the last few games though, Westbrook’s season has definitely been one to remember.