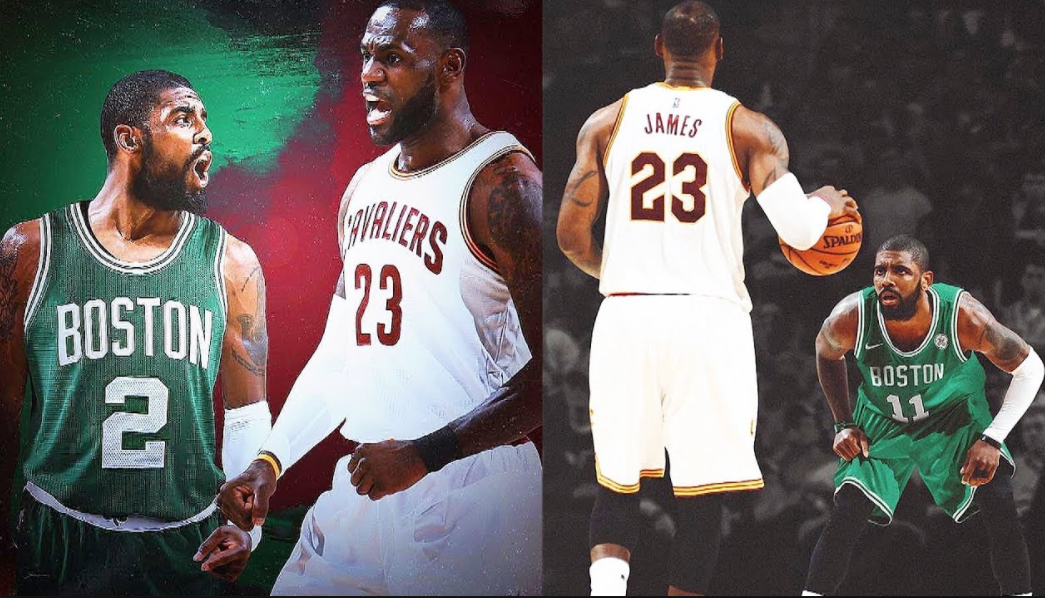 After what seemed like an endlessly long summer, the first bounce of actual basketball will occur this evening — as the Cleveland Cavaliers will host the Boston Celtics. The nightcap will include a tilt between the Houston Rockets and the defending NBA Champion Golden State Warriors.

The storylines swirling around tonight’s slate of games are simply fantastic. We’ll preview each match-up, and offer ‘things to watch’ on this glorious double feature of hoops. Who said professional sports isn’t an extension of theater? This contest between two bitter Eastern Conference foes has more intrigue and potential explosiveness than the latest box office blockbuster. The Cavs dealt disgruntled star Kyrie Irving to Boston in a package primarily focused around Isaiah Thomas and Jae Crowder.

Rarely do you see two direct competitors execute a trade of this magnitude. Boston now has a younger piece to build around for the future. Irving also inherits a role as ‘the top dog’ — something he didn’t have when paired next to LeBron James. When it comes to Cleveland, the team appears more equipped to deal with the juggernaut in the Bay Area. Crowder is a quality wing defender with positional versatility. He essentially can guard four positions on the floor. While currently sidelined with the hip ailment, Thomas is one of the league’s best offensive players when healthy.

Here are some things to watch for in tonight’s clash between the Celtics and the Cavs:

How will Cleveland’s revamped backcourt fare?

With Irving in green and white, the Cavs went out and inked veteran guards Dwyane Wade and Derrick Rose. If this were 2010, Cleveland would possess one of the best backcourts in the league. However, injuries have taken its toll on each player. Rose is coming off a solid year in which he averaged 18.0 PPG and 47.1-percent from the field. Wade also pumped in 18.3 points per contest with Chicago a season ago.

There are two primary issues with this tandem: Below-average play defensively, and a serious lack of spacing. Rose was never considered a great defender, and Father Time has effectively stripped Wade of both athleticism and quickness. Should either be broken down off the dribble, it could set off a sticky situation with LeBron and Kevin Love as the de facto rim protectors roaming the paint.

From a spacing standpoint, Wade (career 28.7-percent from three) and Rose (29.8-percent from three) struggle immensely to fill it up from beyond the arc. LeBron does figure to get them some open looks with his brilliance, but opposing teams likely will attempt to pack the paint versus the Cavs in order to curtail driving lanes. It makes the shooting prowess of both Crowder and Love that much more significant.

Will Boston’s lack of chemistry hurt them?

Though the Celtics finished with the Eastern Conference’s best record a season ago, the team suffered a huge amount of roster turnover. Gone are former stalwarts Crowder, Thomas, Avery Bradley, Kelly Olynyk, and Amir Johnson. The trade for Irving will add some much-needed scoring punch in the backcourt. Duly, the additions of Gordon Hayward and third-overall draft choice Jayson Tatum should increase the offensive capabilities on the wing tremendously in Brad Stevens’s pass-friendly scheme.

The Celtics are banking on many of their young players to perform at a high clip. Tatum and second-year player Jaylen Brown are slated to start alongside Al Horford in the frontcourt. While the athletic ability is enhanced, one can’t discount the defensive brilliance lost with the departures of both Bradley and Crowder. With this being the first actual bit of expanded competition for this group, there will be some growing pains. The dynamic between Irving and Hayward will also be something to watch for.

All cameras will be on the former teammates during the center circle exchange right before tip-off. Will we see a mini-hug? A handshake? A fist-bump? No acknowledgement at all? It would be absolutely amazing if we saw a patented LeBron chase-down block attempt on one of Kyrie’s acrobatic finishes. Golden State is widely expected to repeat as NBA Champions. The NBA’s most dynamic team unbelievably became deeper during the offseason — acquiring reputed glue guy Omri Casspi, enigmatic Nick Young, and second-round steal Jordan Bell. Barring injury, it’s difficult to envision a scenario in which the Warriors would lose a seven-game series. With that said…

…Houston certainly made attempts to push the proverbial needle during the offseason. The addition of Chris Paul gives the Rockets the best playmaking backcourt in the league. Additionally, the bench was strengthened defensively with acquisitions P.J. Tucker and Luc Richard Mbah a Moute. Tonight’s game could very much be a Western Conference Finals Preview.

Here are some things to watch for in tonight’s clash between the Rockets and the Warriors:

Will a Championship hangover exist?

In last year’s season opener, Golden State got blown out at home by San Antonio to the tune of 129-100. It was at a time where the Warriors were debuting Kevin Durant within the squad. It was going to take some time for Golden State to break him in — though no one expected a result quite that shocking. Fast-forward to this season, and it will be interesting to see how the team responds with the pregame ring ceremony. Houston will be highly motivated to show that they belong as competitive opposition.

How will Paul and Harden coexist with each other on the court?

This will be a highly fascinating aspect of the contest. Paul has never played with a player of Harden’s caliber in the backcourt. Similarly, Harden has yet to function with a point guard of Paul’s ilk. Paul likes to pound the basketball into the ground, and rely upon his superb pick-and-roll game. On the other hand, Harden pushes the pace with reckless abandon. Each player will have to slightly alter their styles of play to account for their teammate’s traits. It should work considering the talent and basketball I.Q. both possess — though the volatility with their respective personalities makes for a very compelling subplot.

Will Nick Young set the NBA record for most three-point attempts in a single game?

Affectionately known as a gunner for most of his career, Young now finds himself in a situation where gunning to the nth degree is welcomed. Coupled with the fact he’ll likely get a ton of open looks, and there’s no telling what sorts of shenanigans Young will get involved in on the court. The NBA record for the most three-point attempts in a single game was 22 by J.R. Smith in 2014. Based upon the parameters previously outlined, it’s more than feasible to believe Young will set out for this mark.

The Most Interesting 5-Man Lineup For Every NBA Team