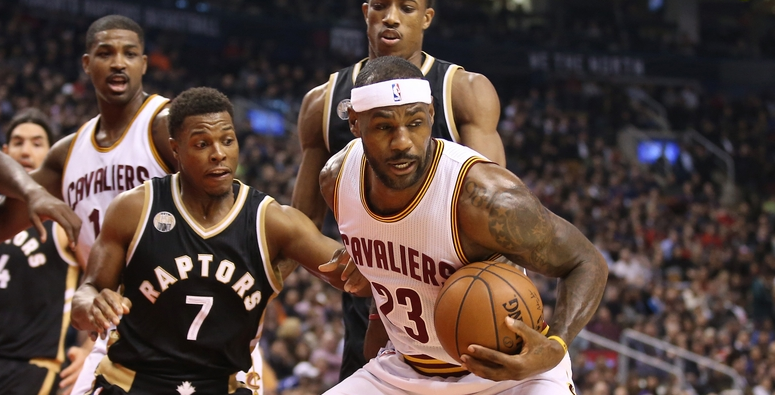 On Friday night, in what could’ve been a preview for the Eastern Conference Finals, Kyle Lowry led his Toronto Raptors to a 99-97 victory over LeBron James and the Cavs.

Lowry, an All-Star this year, dropped a career-high 43 points on 15-of-20 shooting and ended up scoring the game-winning basket on a jumper with 3.8 seconds left. The point guard from Villanova also added 9 assists, 5 rebounds, and 4 steals in 43 minutes.

The game didn’t come easy for Drake’s squad as the Raptors were trailing 91-82 with just over four minutes left. Lowry took complete control though, despite receiving minimal help from his teammates. Terrance Ross was their second leading scorer with 15 points, while All-Star shooting guard DeMar DeRozan went an abysmal 1-of-11 from the field.

On the other side of the court, LeBron James led his team with 25 points, 8 rebounds and 7 assists. Kevin Love also chipped in 20 points, 9 rebounds and 5 assists, but it wasn’t enough for the Cavs as their defense broke down late in the fourth quarter.

“It’s mental mistake after mental mistake, and those hurt more than anything when you can play better mentally,” James said after the game. “People get so caught up in the physical side of the game. We lack mental (strength) right now, and we’ve got to continue to get better with it.”

With just over 20 games left in the season, Eastern Conference supremacy is still up for grabs. The Cavs sit at 41-16, but the Raptors are only two games behind them with a 39-18 record.

No matter which team grabs home-court advantage, Friday’s showdown served as perfect proof that this possible Eastern Conference Finals matchup would be an entertaining one.