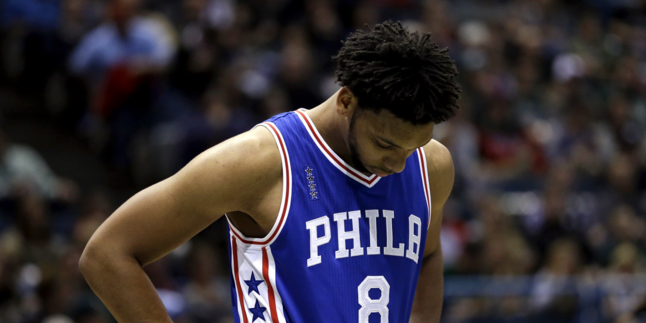 On Monday, the 76ers signed veteran power forward Elton Brand, whose main role will be to mentor rookie Jahlil Okafor. Brand, who was paid $82 million for four underwhelming seasons in Philly from 2008-12, won the 2005-06 Joe Dumars Trophy for sportsmanship, and seems like a completely logical choice as a mentor for Okafor – a rookie who has found himself in a few troublesome off-the-court moments so far this season.

All this is good and fine, and I (along with everyone else) want the Sixers to be less embarrassing, but the true story here is the public shaming of Carl Landry’s mentorship abilities. Until the Brand singing, Landry was the lone member of the Sixers roster over 30 (in fact, newly-acquired Smith was the only other guy over 25).

Landry is on his fifth team in nine years, and has only appeared in four games in his debut season in Philly. But Carl was not brought in to ball; he was brought in to mentor. And with three lottery big men on payroll, he clearly hasn’t been given enough time to impart his wisdom.

If his four years of mentorship work with Boogie Cousins is any indication, he clearly needs more time. But with the opportunity to coach his teammates being wiped away as a result of Brand’s signing, it’s time to either let Carl ball, or let him leave.

Based on the 76ers’ atrocious 4-33 record, leaving certainly seems to be the more appealing option.