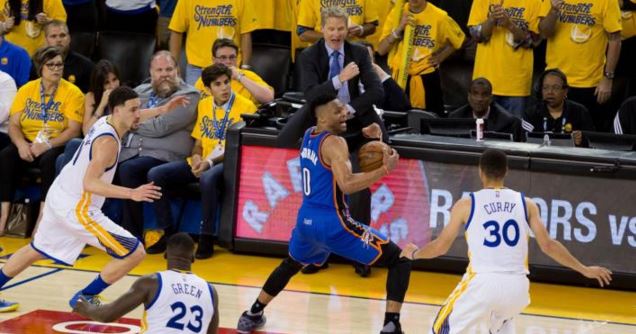 Despite winning 18 fewer regular season games and going winless in three attempts when squaring off against the Golden State Warriors, the Oklahoma City Thunder showed zero fear in Game 1 of the Western Conference Finals.

The result of this fearlessness? A 108-102 victory in front of a stunned Oracle Arena crowd.

But as has become the norm with the Thunder this postseason, their win didn’t come without controversy. Similar to their previous series against the San Antonio Spurs, it took some questionable officiating in the final minute to bring home the W.

Up by three with 20 seconds left, this took place:

Much to the dismay of the Warriors, the referee’s view of the play was obstructed, and a timeout for the Thunder was granted. And while it’s easy to get into hypotheticals as to whether or not the Warriors would’ve gone on to win the game had a travel been called, the Thunder earned this win.

The Warriors let a 13-point halftime lead evaporate, thanks in large part to Westbrook’s 19 third quarter points. The bombastic point guard’s scoring barrage trimmed Golden State’s lead to three entering the final period, and Oklahoma City’s defense took it from there. The Warriors were suffocated by Oklahoma City’s enormous lineup and only scored 14 fourth quarter points.

It was an impressive come-from-behind win for the Thunder, who managed to squeak out the victory despite their two superstars combining to shoot 17-for-51 from the field.

Now up 1-0 with a trip to the NBA Finals on the line, the Thunder’s fearlessness has quickly turned into confidence.