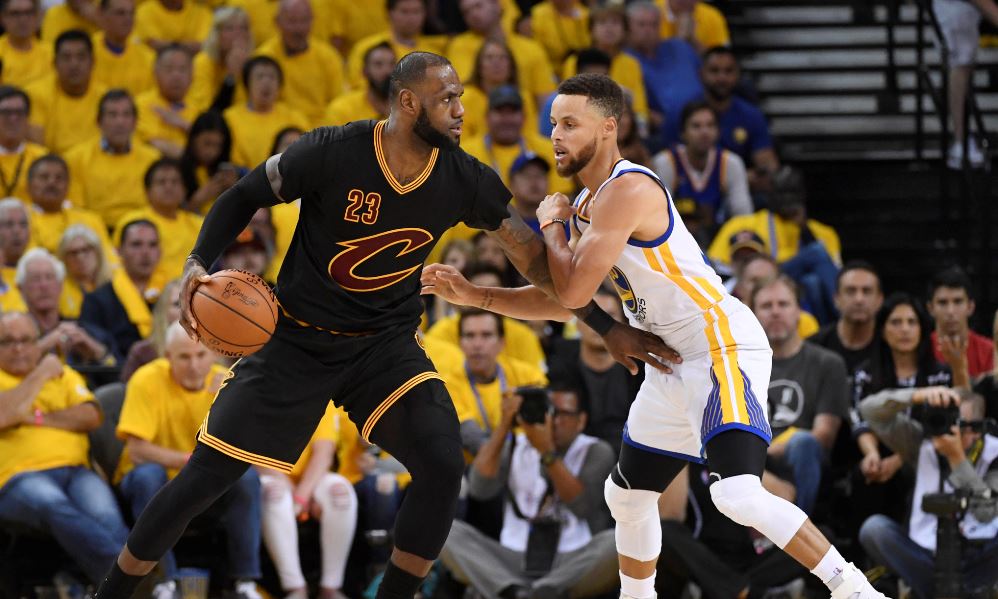 It’s the fourth-consecutive year in which the Golden State Warriors and the Cleveland Cavaliers will square off versus one another in the NBA Finals. Interestingly enough, both teams had similar routes to this current point. Golden State and Cleveland battled a myriad of injuries through the regular season and postseason play. The Cavaliers relied heavily upon LeBron James during the Eastern Conference Finals in order to best the Boston Celtics in a 7-game bloodbath. The Warriors faced a similar threat to their Western Conference throne in the way of the Houston Rockets. It took Golden State seven games to finally extinguish the highly talented Rockets en route to yet another finals appearance.

This piece will attempt to rank all 26 players in this series. Of course, those at the tail-end of the list likely won’t see much in the way of playing time. With that said, depth could play a major role in this series — particularly if Kevin Love and Andre Iguodala continue to be unavailable. Pachulia’s only real value is trying to distract opposing shooters with theatrics from the bench. He has seen his minutes evaporate in correspondence with a propensity for dirty play. We can’t see a reason for Pachulia to get any minutes other than to potentially be an irritant to Thompson. After starting 32 regular season games for Cleveland, the 12-year vet has been penciled in as the team’s starter in three playoff games. With a healthy George Hill, it’s unlikely Calderón sees much playing time in this series, but he remains a capable three-point shooter when called upon.

It’s a wonder why the Cavaliers haven’t turned to Osman throughout this postseason. A team desperate for defense and energy, the 23-year-old Osman could be a spark off a Cleveland bench that has provided next to nothing during this recent Finals run. Interestingly enough, West was phased out of the rotation during the conference finals. Much of that had to do with Houston’s style of basketball — though the veteran power forward has slowed down athletically. He could see some spot minutes against Thompson and Love based upon his physicality and intelligence out on the court. McGee is simply McGee. Looney usurped McGee’s minutes from him — essentially rendering him useless within the collection of centers slumped on Golden State’s bench. A crazy athlete with an even crazier method of playing basketball, McGee won’t see time unless the Warriors are in cruise mode. Hood’s refusal to play during a blowout victory over the Raptors may have cost the young swingman millions of dollars. He’s lost his place in the rotation, and Cleveland lost all three games Hood appeared in against Boston. It’s easy to keep him on the bench when he’s shooting 26-percent from three since February 25th. McCaw just recently returned from an injury-plagued season. He’s likely still a bit rusty — and probably won’t be counted on for any semblance of offensive production. However, McCaw is the most athletic wing defender on Golden State’s bench. He could see some minutes as a possible answer for the likes of Smith, Korver, and Hood. After tearing up the D/G-League for years, Cook finally nabbed a rotation spot on an NBA team. As to be expected, his crazy shooting numbers in the regular season (44.2-percent from three) haven’t translated over to postseason play (23.3-percent from three). With that said, Cook is a solid player with the ability to fill-in in a pinch. He isn’t expected to play major minutes in this series (barring injury). The former Laker has seen better days. After shooting a blistering 40-percent during his 28-game regular season run in Cleveland, Clarkson has come back down to earth. He’s been a train wreck on both ends of the floor this postseason, shooting 31-percent from the field in his first postseason. Albeit the struggles, Clarkson was trotted out to begin the fourth quarter of Game 7 in Boston. Lue believes in him as Cleveland’s third guard (primarily because there aren’t any alternatives). In many ways, Young is Golden State’s version of Smith. The wing has an irrational sense of confidence despite struggling to shoot the basketball. With that said, he’s also capable of quickly getting 10-to-15 points with ease. Young could be somewhat of an X-Factor for the Warriors as an off-the-bench scorer.

With Looney thrust into a starting role, Bell has steadily seen minutes off the bench. He isn’t much of an offensive threat from anywhere on the court. Bell also struggles somewhat with the mental side of the game — something that isn’t a surprise considering he’s only a first-year player. In this series, he likely will square off with a fellow high-energy pogo stick in Nance Jr. Nance has made an impact in the small amount of time he’s had on the floor. He made 11 straight field goals in the Celtics series, and was constantly hustling for loose balls and rebounds. At any given moment, a player like Nance can turn the tide of the game with a massive defensive play or a highlight reel dunk. Looney has settled in as the fifth starter with Iguodala being sidelined. He’s acquitted himself as a dependable defender — particularly in terms of protecting the paint. His battle with Thompson down low will be one to watch. Looney must help keep Thompson off the boards as best as possible. Smith has now played 18 games in the 2018 playoffs, matching the number of appearances he had in last year’s postseason. The only difference? Last season, JR shot 50-percent from the field and from three. This year, he’s down to 35-percent from the field, and 36-percent from three. Luckily for Smith, he’s been rather good against Golden State in their previous match-ups. As a starter in the NBA Finals (12 games), Smith is knocking down 45-percent of his shots from beyond the arc. With Kevin Love’s status up in the air, the Cavs will have to rely on Green to fill in as the team’s starting power forward. Green has been marred by inconsistency his entire career. Don’t expect this series to go much differently. As much as Cleveland would love to see him replicate his 19-point Game 7 performance against the Celtics, it’s just as likely Green ends up as a complete non-factor in this series. The 37-year-old continues to find ways to be a productive player in Cleveland’s rotation. Korver remains the only source of consistent offense on Ty Lue’s ragged bench. He’s been tremendous at home during these playoffs, knocking down 55-percent of his threes at Quicken Loans Arena. We fall for it every year. Thompson vastly underperforms in the regular season while eating up a large portion of Cleveland’s cap space, only to play his way back into the rotation by the time the postseason rolls around. He has effort on both ends, and is probably the best rebounder in this series. Cleveland needs him to dominate the glass. On paper, Hill is the perfect type of player to combat Golden State’s offense. He’s long, experienced, versatile defensively, and a quality spot-up shooter. That last part hasn’t held true these playoffs though, as Hill is currently shooting a career-low 25.7-percent from deep. If he’s not knocking down shots, he’s not worth defending. Iguodala’s current placement is dependent upon his potential availability for the Finals. A bruised knee has forced the veteran to miss the last four games of the prior series. Not only is Iguodala a wily defender, but he also possesses a ton of Finals experience — something any team could use. His value on the court means more than his somewhat paltry statistical outputs in the box score. Livingston is the unabated leader off what’s recently developed into a very shallow Golden State bench. While he wasn’t statistically impressive in the last round, his ability to guard multiple spots on the floor will be key — especially on plays designed to get Cleveland’s three-point shooters open looks. Livingston still possesses the necessary quickness and length to work around the expected barrage of screens. Love is Cleveland’s lone X-factor. Outside of LeBron, Love will be the only Cavalier that can hold a definitive advantage over certain match-ups. Love can post up smaller players, and drag bigger defenders to the perimeter. Either way, if Love is making shots and crashing the glass, the game becomes much easier for James. Cleveland’s hopes are greatly boosted if Love can outplay both Klay Thompson and Draymond Green. While Green struggled immensely to shoot the ball versus Houston, he was his usual dominant self on the defensive end. Green averaged 13.6 rebounds, 1.6 blocks, and 2.0 steals in the Conference Finals. Once again, he’ll be tasked with trying to slow down James during certain spurts in the series. In the Western Conference Finals, Thompson quietly averaged 19.4 PPG on 48.1-percent shooting from the field and 49.1-percent from three. Cleveland possesses older perimeter defenders across the board. As such, Thompson could be in line for a monster series versus the likes of Smith and Korver. Curry is the unquestioned engine of the Warriors’ team. Whenever his proverbial engine is revving, Golden State is nearly impossible to beat. Cleveland must prevent Curry from finding his rhythm after halftime — as the sharpshooter killed Houston with multiple third quarter explosions. In the second installment of the Durant-James finals match-up, the 29-year-old will look to guide his team to its second-straight championship. James will likely draw the initial assignment versus Durant. Should this come to fruition, look for Durant to go at him early and often. The greatest player of this generation gets another crack at the greatest team of this generation. The idea that James isn’t clutch has been debunked for a number of years, but this monstrous postseason run has completely destroyed that narrative. Carrying this current iteration of the Cavaliers to the Finals may be The King’s best feat yet. It’s hard to imagine he can topple the mighty Warriors and their four All-Stars, but if James finds a way, his case as the G.O.A.T only grows stronger.