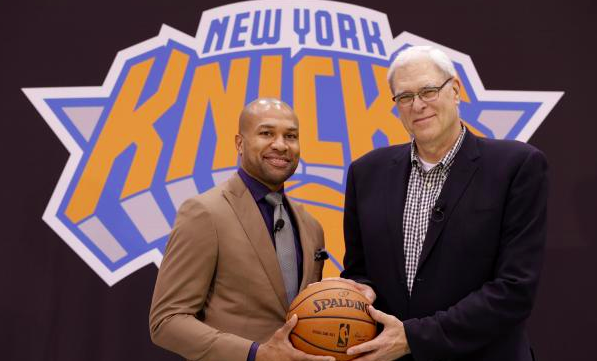 Offseason Recap
Phil Jackson promised big things when he illustriously came to New York in April of 2014. This past free agency was supposed to be the finishing touch to a crucial summer for the Knicks organization. Despite numerous offers to more lucrative players, they settled on Robin Lopez and Arron Afflalo (and Derrick Williams!) as their top signings.

It’s hard to fathom, but when Robin Lopez sat down with his agent on July 1st, they thought they could get a $60 million offer from a team. While most found this idea ludicrous, the Knicks’ desperation to make a big splash in free agency and the exploding salary cap helped make Lopez’s dream a reality.

The Zen Master has officially unveiled his rebuilding plan, and made it clear that he’s doing it on his own terms. He ultimately pulled the trigger on the ‘once-in-a-lifetime’ Latvian big man Kristaps Porzingis with the fourth pick in the 2015 draft. Although he’s listed at 7’3″ in his bio, Porzingis is only 19 and still might not be done growing. While this has already garnered him the dreaded Shawn Bradley comparison, it also speaks to his tremendous potential.

Lopez and Afflalo should fill their roles nicely in the starting lineup, but they aren’t the stars that New York fans anticipated. They spent the rest of their cap space on forwards Derrick Williams and Kyle O’Quinn, who are both very unproven thus far in their short careers. Slovenian guard Sasha Vujacic, who last played full-time NBA basketball back in 2011, hopes to help his teammates learn the triangle offense after Phil wisely signed him to a fully guaranteed contract.

Second-year coach Derek Fisher looked overwhelmed by the bright lights in Madison Square Garden last year and has zero quality wins so far. This season, he hopes to incorporate multiple facial expressions, as opposed to the perpetual blank stare we witnessed for 99.9 percent of last season.

Oh, and in case you forgot, they have a 31-year-old superstar with a bum knee and $100 million left on his deal.

Best Case Scenario
Anthony relives his Syracuse glory days while casually winning the NBA scoring title. Porzingis shows more poise and composure than any Knicks fan expected going into the year, and fellow rookie Jerian Grant also demonstrates why the Knicks drafted him in the first round. Robin Lopez forms a captivating crosstown rivalry with his twin, Brook Lopez, and they finally get to spend Halloween together in their authentic Batman and Robin jumpsuits. This Knicks team just isn’t talented enough on paper, so unless they make a monumental trade at the deadline, year two of the Phil Jackson regime involves sneaking into the playoffs.

Worst Case Scenario
Their health and depth issues linger through training camp and the Knicks go 5-36 over the first half of the season. Melo doesn’t touch the court again after the All-Star Break and the young guns get ample playing time in front of a deserted Madison Square Garden crowd. They eventually try to tank, but fail at that too, falling outside the top three draft picks. Wait, that happened last year? Well, there is one slight difference this year… they don’t have their first round pick.