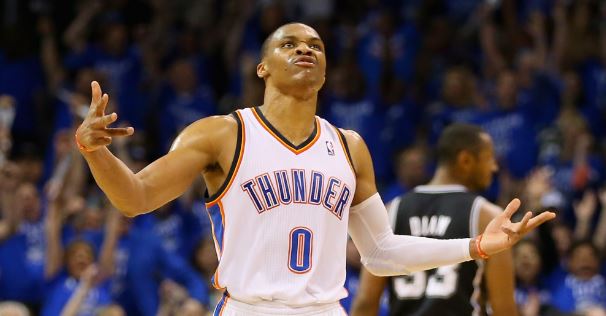 Oklahoma City’s summer has been one big, tumultuous, depressing and heart breaking roller coaster thus far. With Kevin Durant bolting for the Golden State Warriors, co-superstar Russell Westbrook is suddenly left with his own team.

According to Howard Beck of Bleacher Report though, the current scenario may not last for long. Beck has reported Westbrook could be on the move “sooner, rather than later,” with the Boston Celtics emerging as the most likely destination.

Should talks start to gain traction, Jae Crowder, Avery Bradley and/or Marcus Smart would be the likeliest candidates to be tossed into the hypothetical deal. But with a player of Westbrook’s caliber, Boston’s current pieces wouldn’t be enough for the Thunder to part ways with their superstar.

Luckily for Celtics fans, this is the exact situation general manager Danny Ainge has planned for all along. Having hoarded picks over the past few years, Boston is well-equipped to part with numerous assets in exchange for a franchise-altering superstar.

Of course, this potential deal would also hinge on Westbrook agreeing to a long-term contract with the Celtics. Set to be a free agent in 2017, no team would be willing to send anything to Oklahoma City without receiving assurance from Westbrook that he would commit to an extension.

However, this is where matters get more complicated. Westbrook hasn’t given any indication where he wants to continue his career, meaning most teams are hesitant to pursue the point guard.

One of the few teams that has been rumored as a potential landing spot is the Los Angeles Lakers. Despite their recent lack of success, Westbrook’s deep ties to Los Angeles can’t be overlooked.

Based on Beck’s latest report, the Celtics are the frontrunners as of now, but it appears the “Russell Westbrook Sweepstakes” is shaping up to be the next chapter in the NBA’s greatest rivalry.