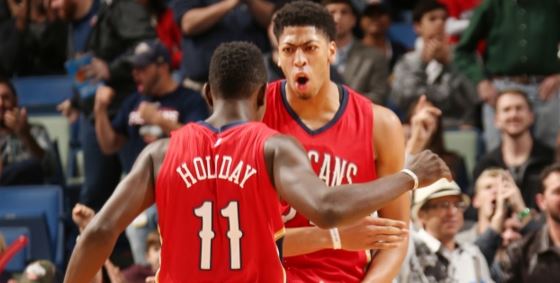 Anthony Davis has officially been benched for the rest of the season due to a torn labrum in his left shoulder and a nagging left knee injury. The 4-year veteran from Kentucky was averaging 24.3 points, 10.3 rebounds, 2.0 blocks and 1.3 steals per game.

New Orleans’ decision to shut down their superstar comes as little surprise for a team that vastly underachieved this year. After last season’s postseason appearance as the No. 8 seed in the Western Conference, many expected the Pelicans to build on that success behind a young core of Davis, Jrue Holiday and Tyreke Evans.

Unfortunately, injuries and struggles on the defensive end have resulted in the No. 12 seed in the West and a putrid 26-43 record.

Sitting 8.5 games back of the Dallas Mavericks with 13 games to play, it would seem there’s little reason for Davis to fight through injuries and log any more minutes during a lost season. However, Davis’ unique contract situation makes this topic much more perplexing.

Due to the “Rose Rule,” Davis will need to make either the First, Second or Third Team All-NBA if he is to earn all $145 million from the contract he signed this offseason. If he fails to do so, his contract will instead be in the five-year, $120-$125 million range.

These last 13 games would’ve given Davis the opportunity to finish strong, but New Orleans is clearly more concerned with preserving their superstar’s long-term health. Plus, Davis missing out on All-NBA honors would save the Pelicans $20-$25 million in salary over the next five seasons.

Don’t think that didn’t weigh heavily in their decision as well.