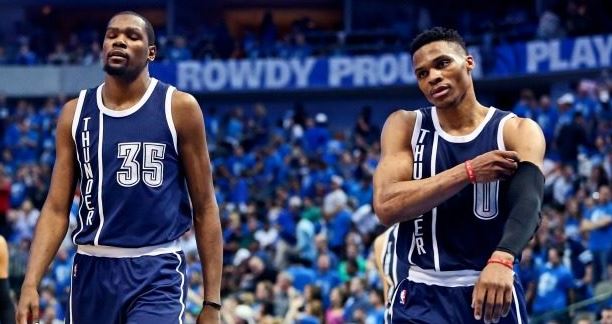 Kevin Durant broke plenty of hearts on July 4 when he announced he would be leaving the Oklahoma City Thunder for the Golden State Warriors, but no one was more directly impacted than Russell Westbrook. Durant’s running mate for the past eight seasons will now be asked to carry the Thunder franchise alone, while also dealing with his looming free agency in 2017.

And while it’s fair for Westbrook to feel betrayed, new details are suggesting the hurt runs even deeper. Westbrook has yet to speak publicly on the matter, but inside sources say it’s the way Durant went about bolting for Golden State that has the point guard so upset.

In addition to the fact that Durant never personally reached out to Westbrook to explain his choice, Royce Young, an ESPN writer who covers the Thunder, shared this anecdote:

“Three weeks ago, Kevin Durant’s sitting there at dinner, telling him [Westbrook] ‘Hey, I’m coming back, man. Don’t worry about it.’ Kevin Durant, more so than even that, was telling people, ‘Hey, yeah, I mean I’m coming back.’ Like I said in there, a week before Kevin Durant sat down in the Hamptons, he was in Oklahoma City ready to make an offer on a multi-million-dollar house. So, the guy was pretty serious about coming back, and then things turned rather quickly for him to leave. And there’s no doubt that the organization felt a little bit burned by this.”

Since Oklahoma City doesn’t want to make the same mistake of losing a superstar to free agency for nothing two summers in a row, they are hoping to sign Westbrook to a contract extension in the near future. But with Westbrook originally believing he would have this year to contemplate his free agency options, Durant’s decision has forced Westbrook’s hand much sooner than anticipated.

Whether Westbrook remains a member of the Oklahoma City Thunder remains to be seen, but no matter where he decides to sign, any matchup against Kevin Durant and the Golden State Warriors will be can’t-miss television.