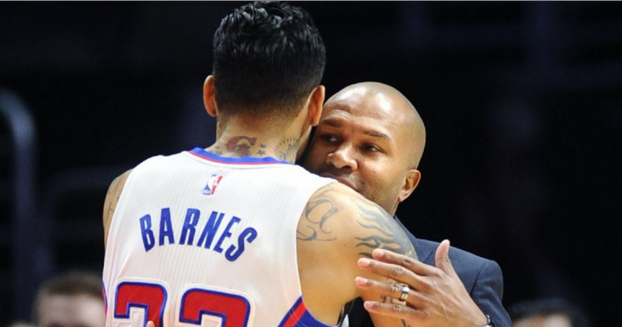 The NBA has suspended Memphis Grizzlies forward Matt Barnes (again), only this time, it had nothing to do with his actions on the court. Barnes was suspended two games for an October 3rd incident involving Knicks coach Derek Fisher.

The league made a statement saying that its investigation of the event is closed, implying that Fisher won’t receive any discipline for his role in the event.

The original report claimed that Barnes was texting and Facetiming with his sons when he noticed how upset they were. One of his twin boys told him that “Mommy’s friend Derek is here,” and Barnes got the impression his children were uncomfortable.

Barnes then drove to the home of his ex-wife, Gloria Govan, where a physical altercation between he and Fisher took place. The police were called, but no charges were filed.

All of this took place during a party at Govan’s house, suggesting there were plenty of people who saw the fight between Barnes and Fisher play out. It remains unclear as to why Fisher avoided suspension, but it makes one think Barnes must’ve instigated the entire incident.

While we will never know what truly took place, one thing is clear – Matt Barnes will not be traded to the New York Knicks anytime soon.