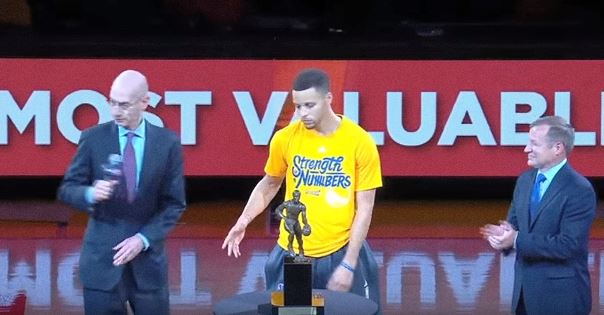 Even when things don’t go right for Stephen Curry, they still seem to somehow turn into a positive. Wednesday night’s MVP presentation before Game 5 against the Portland Trail Blazers proved to be the latest example, as a miscommunication between Curry and Commissioner Adam Silver had the entire social media world laughing:

Never one to take himself too seriously, Curry had no problem laughing at the embarrassing miscue. Silver obviously didn’t spurn the NBA’s biggest star on purpose, and was quick to post this apology to the back-to-back MVP: It was a celebratory night for Curry as he was presented the MVP trophy in front of a raucous Oracle Arena crowd for the second straight season, and helped lead the Warriors to a 125-121 series-clinching victory. Having punched their ticket to the Western Conference Finals, Golden State now awaits the winner of the Oklahoma City Thunder-San Antonio Spurs series.