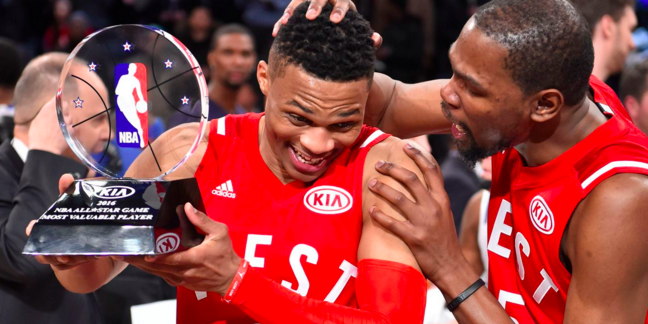 He joins Bob Pettit as the only players in All-Star Game history to win twice in a row – Pettit won the award in 1958 and shared it with Elgin Baylor in 1959.

“I was honestly surprised I won it again,” Westbrook said. “I was very surprised to have my name called. I’m happy and blessed to be in the game again and for the opportunity.”

In a game that showered Kobe Bryant with love and support, the Oklahoma City Thunder duo (Westbrook and Kevin Durant) stole the show. Durant poured in 23 points and was the other key cog in leading the West to victory.

For the Eastern Conference, Paul George of the Indiana Pacers scored a game-high 41 points, including nine 3-pointers, and fell two points shy of topping Wilt Chamberlain’s All-Star record of 42.

Toronto played host to one of the most entertaining All-Star Saturday nights in history, but sadly, the same could not be said of Sunday’s game. In an event without any defense whatsoever, three-pointers and highlight reel dunks simply became the norm.

Unless the NBA somehow incentivizes the All-Star Game (say, home-court advantage in the NBA Finals to the winning conference), Saturday will continue to be the only day of All-Star Weekend fans care about.