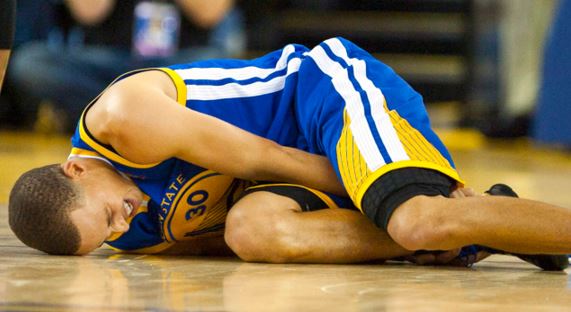 The Golden State Warriors suffered a setback in their quest to repeat as NBA champions Monday, as star Stephen Curry was diagnosed with a sprained right MCL.

After spraining an ankle in Game 1, the reigning MVP returned for Game 4 in Houston with his team leading the series 2-1. Unfortunately for Curry and the Warriors, Curry’s night ended on the last sequence of the first half:

Curry returned following halftime to test the knee, but the pain was too much to continue.

On Monday, an MRI confirmed Curry suffered a Grade 1 sprain to his right MCL – an injury that will keep him out of the playoffs for a minimum of two weeks.

Warriors general manager Bob Myers and Curry himself seemed to be pleased with the results.

With a roster featuring multiple All-Stars, the Finals MVP from last season, and one of the top defenders in the league, Curry’s injury doesn’t signal the end of the Warriors’ season. While it certainly makes the road to the Finals tougher for the winningest regular season team in NBA history, Golden State should still be seen as one of the favorites to win it all.

If the Warriors hold off the Rockets and advance, the Western Conference semifinals will begin on either May 1 or May 3 against the winner of the Los Angeles Clippers-Portland Trail Blazers series.