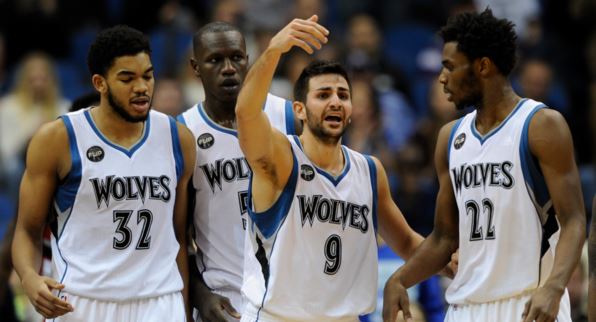 It may only be the first round of the NBA playoffs, but that hasn’t stopped lottery-bound teams from searching for personnel heading into next season. The Brooklyn Nets have already hired ex-Atlanta Hawks assistant coach Kenny Atkinson to take over the team, and reports suggest the Minnesota Timberwolves could be the next franchise to hire a new head coach.

While Brooklyn’s lack of draft picks and talent has their future looking grim, the exact opposite can be said of the Timberwolves. With a young nucleus of Karl-Anthony Towns, Andrew Wiggins, Zach LaVine, Ricky Rubio and Shabazz Muhammad, Minnesota’s head coaching vacancy is a surprisingly attractive one.

As a result of Minnesota’s immense potential, it comes as little surprise that big name head coaches like Tom Thibodeau and Jeff Van Gundy have thrown their name in the ring. Both coaches are widely respected within NBA circles, and will each attract plenty of attention from teams around the league.

Thibodeau took this year off after being fired by the Chicago Bulls following the 2014-2015 season, while Van Gundy hasn’t manned the sidelines as a coach since 2007. However, both coaches are unique personalities that could mesh well with Minnesota’s budding young group.

Thibodeau is a defensive mastermind who could help a Timberwolves squad that ranked in the top half of the league in offensive efficiency, but 28th in defensive efficiency. With a great on-ball defender in Rubio, an elite rim protector in Towns, and two long, athletic wings in LaVine and Wiggins, Thibodeau could do wonders for Minnesota.

Despite commentating instead of coaching for the past nine seasons, Van Gundy remains one of the brightest minds in coaching. A classic “X’s and O’s” guy, Van Gundy is the ultimate player coach who breeds team chemistry and gets the most out of his players.

Even after this season’s disappointing 29-53 campaign, there’s enough talent in place (plus a high draft pick this June) for Thibodeau or Van Gundy to lead this team to the playoffs next year for the first time since 2004.