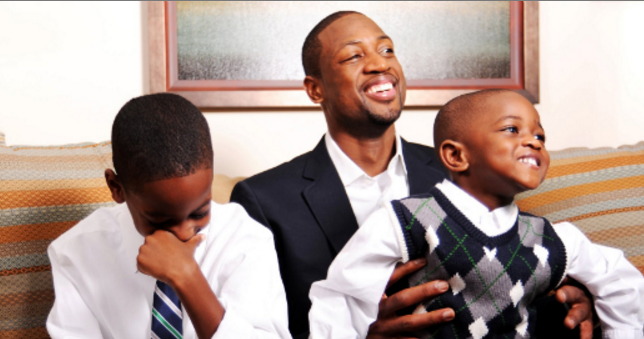 Dwyane Wade might be 34 years old, but he is still the face of the Miami Heat’s franchise. Despite nagging injuries over the past few years, Wade continues to produce and is averaging 18.7 points, 4.1 rebounds and 4.6 assists per game this season.

The numbers have been impressive enough to have him voted in as an All-Star starter, where he will suit up with Kyle Lowry, LeBron James, Carmelo Anthony and Paul George to represent the Eastern Conference.

Wade has helped lead his Heat squad to a 25-21 record – good for sixth in the East – and continues to play with the reckless abandon that makes him a future Hall of Famer. While the 13-year veteran has struggled with his jump-shot at times this season, it appears he has a good voice/coach in his ear to help him stay confident.

Zaire Wade, Dwyane’s 13 year-old son, sent a text to the man he calls “big dog” to give some tremendous advice. Dwyane allowed Heat writer Ethan Skolnick to post the message on Instagram, which read: Wade proceeded to score 27 points against the Brooklyn Nets that night, getting to the rim at will while shooting 50 percent from the field. The former Marquette star now has 55 points in his last two games, and seems to be finding his groove.

With the Heat hoping to make a serious run at the Cleveland Cavaliers for Eastern Conference supremacy this postseason, Zaire’s motivational ways could pay huge dividends.