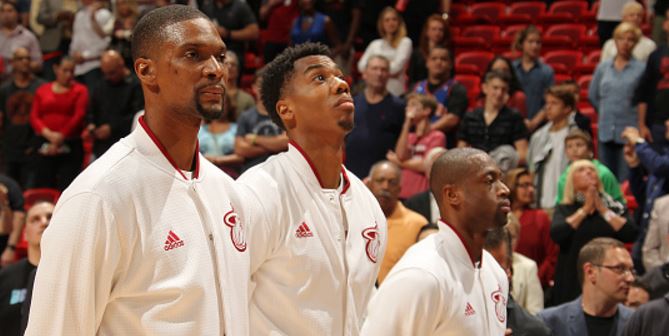 After Miami Heat superstar Chris Bosh removed his name from All-Star consideration in February due to a leg injury, the general consensus was that he would return to the court soon. However, the Heat’s medical staff never gave the go-ahead, as Bosh was diagnosed with blood clots in his leg.

This is the second consecutive season that Bosh’s year has been cut short by blood clots, and suddenly leaves his NBA future hanging in the balance.

Bosh has consistently made an effort to return to the court, but the Heat organization has remained much more cautious. Heat president Pat Riley commented on the stalemate between the two sides, saying, “It’s going to have to be done in a way that we all feel good about. We will join him in trying to find a way to get him back on the court.”

Bosh’s absence certainly leads to plenty of what-ifs for the Heat – a franchise that came one win away from its fifth Eastern Conference Finals appearance in the past six years. In addition to Bosh’s void, the Heat’s chances took another big hit when they lost center Hassan Whiteside to a sprained MCL. Despite playing without their two best frontcourt players, Miami still managed to push the Toronto Raptors to seven games.

With their season now over and Riley conducting his annual season-ending press conference, he was quite forthright in the organization’s three main objectives: find a way to get Bosh healthy and back on the floor, re-sign Dwyane Wade and re-sign Whiteside.

If all three can be accomplished this offseason, the Heat should have no problem returning to the Eastern Conference Finals next year.