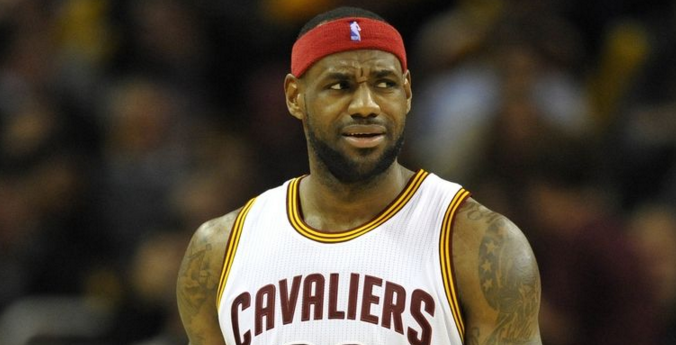 Regardless of the remarkable things that kid in Golden State is doing on a nightly basis, the best player in the world still plays for the Cleveland Cavaliers (and I’m not talking about J.R. Smith). LeBron James’ numbers aren’t quite as eye-popping as usual, but his team still finds themselves in a great position despite several major injuries.

RELATED: Why LeBron James Is Now Michael Jordan’s Heir Off The Court As Well
As the most polarizing figure in sports today, it’s truly fascinating watching James evolve into a more cerebral and cold-mannered athlete. Gone are the dance parties on the sideline and the post game photo bombs – a few of the things cynics pointed to as the culprit for James’ faltering in the postseason.

LeBron has become a more calculated athlete, and that was on full display this past weekend when he decided to sit out a road game against the Miami Heat. The Heat own the best record in the conference, and any time LeBron plays in Miami for the remainder of his career will be considered a huge deal.

Although Cleveland is still waiting on the return of guards Kyrie Irving and Iman Shumpert, the game could have been an incredible playoff preview. But James, coming off a brutal overtime loss against the Pelicans, chose to rest on the second night of a back-to-back. And while a starting line-up consisting of Matthew Dellavedova and Richard Jefferson might strike fear at your local YMCA game, the Heat cruised to a 99-84 victory against the undermanned Cavs.

Sure, you can point to James simply wanting a bit of rest, or maybe he’s nursing a few injuries, but with the way LeBron’s past couple of seasons have ended, it seems all too likely that this was a calculated plan. Tearing a page out of the Gregg Popovich book, James knows that the regular season doesn’t matter that much.

A healthy Cavs team could roll through the Eastern Conference as an 8-seed, and LeBron knows all too well that grueling, hard-fought regular seasons games at this point in his career will do more harm than good.

With the Warriors and Spurs playing incredible basketball, it’s becoming less and less likely that the Cavs will end up with home-court against either of the two Western Conference juggernauts. LeBron will sit out games he sees fit, and do just enough to put his team in perfect position come playoff time.

Residents in Miami who bought tickets to see LeBron play have every right to be angry, but 18,000 bitter Heat fans is a small price to pay as long as James brings an NBA title to Cleveland.