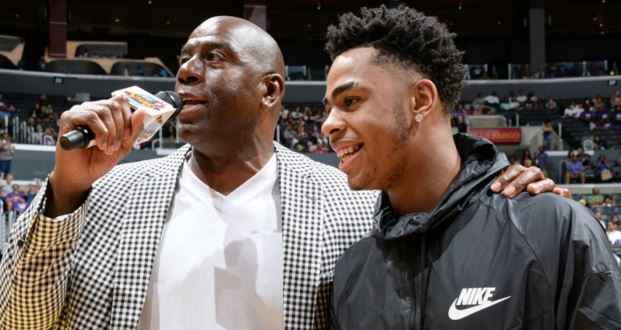 The Los Angeles Lakers have been a disastrous franchise for the past two seasons, but optimists believe the hiring of head coach Luke Walton will be the key to turning things around. One of those optimists is Laker Hall of Famer, Magic Johnson, who has been quite vocal in his excitement about the 36-year-old replacing Byron Scott.

It’s a bit surprising that Magic is so happy considering he and Scott were backcourt teammates during the ‘Showtime’ era, but Scott’s archaic philosophies played a major role in the Lakers’ 38-126 mark during his tenure. Now enter Walton, whose coaching background with the new-age Golden State Warriors is expected to catapult the Lakers back to prominence, and it’s easy to see why people are excited about the change.

Magic kicked off his excitement with these two tweets:

While Magic’s Laker loyalty has never wavered, he already appears to be taking a more hands-on approach now that Kobe Bryant is no longer in the locker room. Johnson already met with point guard D’Angelo Russell for lunch, and tweeted it wouldn’t be the last time they get together this offseason:

Beyond providing guidance to Russell, Magic has also been playing virtual general manager, tweeting who he believes the Lakers should target during free agency:

It obviously doesn’t take a genius to suggest Los Angeles should try to sign Kevin Durant, LeBron James or DeMar DeRozan, but Magic’s enthusiasm for a Lakers turnaround is a welcomed addition for a franchise that sorely needs it.

With Magic involved, Byron Scott gone and Luke Walton now in charge, the only direction the Lakers can go is up.