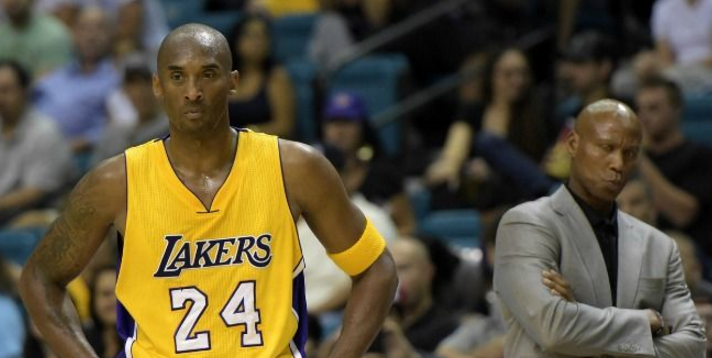 The ‘Kobe Bryant Farewell Tour’ has helped cover up what has been the most humiliating season in Los Angeles Lakers history. Sitting with the second worst record in basketball at 15-59, the Lakers hit an all-time low Monday night against the Utah Jazz.

After Kobe received what has become the typical tribute video for every road game, the Jazz completely blitzed a befuddled Lakers squad. On a day where head coach Byron Scott celebrated his 55th birthday, the Lakers came mighty close to commemorating their coach with a 55-point loss.

Instead, Los Angeles was defeated by 48 points – the biggest margin of defeat in Kobe’s 20-year career. The Lakers also lost by 48 in 2014 to the Los Angeles Clippers, but Bryant wasn’t in uniform for that game.

Much of the Lakers’ 27-point halftime deficit could be attributed to Jazz wingman Rodney Hood. The former Duke star had 30 points and was 8-for-9 from beyond the arc after two quarters of play. In the third quarter though, Kobe turned back the clock to his days as a lockdown defender and completely shut down Hood.

Coach Scott was visibly annoyed with his younger players after the game, saying, “It’s a damn shame that our oldest player [Kobe] has to take the challenge. It says a lot about him. Obviously that’s what he’s done all his life. But nobody else wanted to step up and take that challenge. That’s a shame that the oldest guy on our team that’s leaving this league in eight games was the one that had to kind of shut him down.”

While much can be said of Kobe’s inefficient play this season, there’s no denying the intangible benefits Kobe still provides to this young squad. And with Bryant only eight games from saying goodbye to the NBA forever, it’s safe to wonder if Scott’s 56th birthday will be an even worse one.