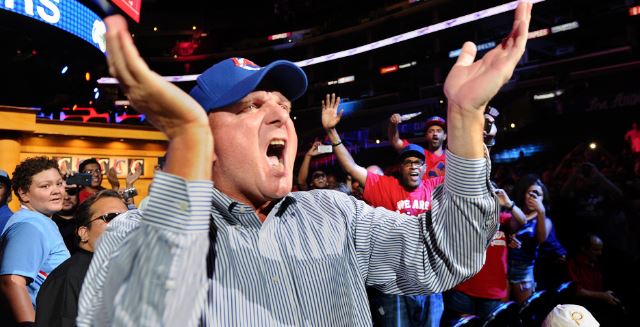 The Los Angeles Clippers are apparently tired of playing in the Lakers’ massive shadow, as owner Steve Ballmer has begun searching for a new home for the Clippers. While the Clippers’ Staples Center lease doesn’t end until 2024, a new arena could serve as the team’s headquarters until then.

Despite the Clippers’ recent success, there’s no denying that Staples Center is first and foremost home to the Los Angeles Lakers. The teams have shared the building since 1999, but the there are no Clippers banners to be found. Meanwhile, the Lakers, Sparks, Kings and even Taylor Swift all have memorabilia hanging from the ceiling.

Since purchasing the Clippers in August 2014 for an NBA-record $2 billion, Ballmer has expressed his displeasure with the Staples Center setup, going so far as to request that the Lakers’ banners be covered up during home games.

With regards to the current fan experience, the boisterous owner had this to say on the matter:

“We don’t own our arena, so a lot of the things about fan experience — food and beverage — they’re not on our list because, frankly, we get what we get from AEG, who owns Staples Center.”

As the team looks for a new home, Ballmer has made it clear that the organization will not be moving from Los Angeles. Instead, it’s believed Ballmer would like the Clippers to have their own stadium on the west side of Los Angeles.

Clippers players and fans should be ecstatic at the thought of escaping the Lakers’ shadow. Now, the only two questions that remain for the Clippers are ‘where’ and ‘when.’