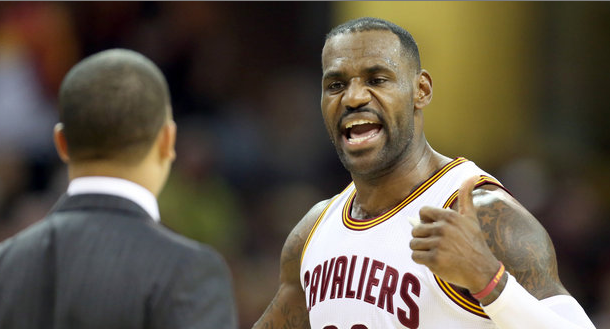 LeBron James has been the center of odd conversation lately, and it’s clear that the Cleveland Cavaliers haven’t been too pleased with the talk surrounding their superstar. In fact, the 31-year-old small forward recently met with head coach Tyron Lue and general manager David Griffin to discuss James’ recent behavior.

After unfollowing the Cavaliers’ social media account on Twitter, the 4-time MVP was questioned by reporters on why he chose to do so. Rather than give a straightforward answer, LeBron refused to answer while looking visibly annoyed by the question.

While his social media behavior drew the ire of reporters, it was his actions during halftime against the Miami Heat that really upset his organization.

During warm-ups before the second half against Miami, James was seen laughing with shooting guard and good friend Dwyane Wade. While normally not considered a big deal, the Cavs were particularly perturbed since they were trailing by 21 points at the time. Lue talked to James, saying that the 14-year veteran’s conduct wasn’t normal for someone who is viewed as the leader and the face of Cleveland.

“I just told him we can’t have that, being down like we were and him being the leader,” Lue said. “Just me being a competitor, I didn’t like it. We had a long talk about it. It was good. He understood, he apologized, and he’s been great.”

Recently, James spoke of his desire to form a ‘superteam’ with best friends Dwyane Wade, Carmelo Anthony and Chris Paul. It’s odd, considering the Cavs sit atop the Eastern Conference and are legitimate NBA title contenders with their current squad.

Despite James’ bizarre leadership as of late, he is still averaging a remarkable 25 points, 7.4 rebounds and 6.6 assists per game this season. After talking with Lue, James said he is moving forward and will try to do more for his team.

The Cavs hope LeBron’s help starts extending off the court as well.