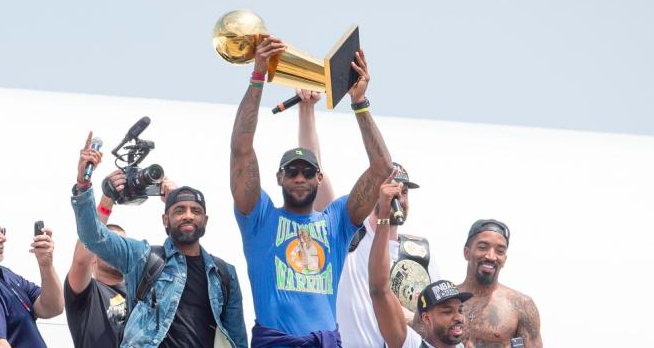 For 24 hours, the city of Cleveland got to celebrate LeBron James bringing the Cavaliers the franchise’s first-ever NBA championship. But once it was realized that James was a free agent and allowed to sign with any team, nightmares of “The Decision” in 2010 came rushing back.

Well have no fear Cleveland, because LeBron has already announced he won’t be donning anything but a Cavaliers jersey for the foreseeable future.

At the championship parade, the Ohio native said, “I love it here in Cleveland. I have no intentions of leaving. There are some technicalities to take care of I’ll leave up to my agent. That’s right from the horse’s mouth.”

The ‘technicalities’ LeBron is referring to are a result of the NBA’s salary cap burst set to take place this offseason. Rather than keep the same contract that would pay him $24 million next season, LeBron will opt out and renegotiate to receive a bigger piece of the Cavs’ $94 million payroll.

And while logistics can’t be sorted out until July 1, knowing LeBron will be wearing a Cavs uniform when they receive their rings on opening night of the 2016-2017 season means Cleveland can really start to celebrate this championship.