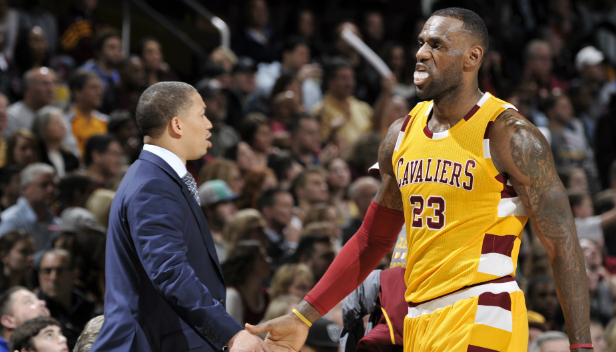 In a must-win scenario, Cleveland dropped Game 4 of the NBA Finals in front of their home crowd, losing 108-97. The Warriors completely shut down the Cavaliers in the fourth quarter, allowing them to take a commanding 3-1 lead in the series.

And while Golden State deserves plenty of credit, head coach Tyronn Lue believes the poor officiating had just as much to do with the end result. Speaking specifically on LeBron only shooting four free throws in the game, Lue said, “He never gets calls. I mean, he attacks. Outside of Russell Westbrook, he’s one of the guys that attacks the paint every single play.”

Lue continued, “And he doesn’t get a fair whistle all the time because of his strength and because of his power and guys bounce off of him. But those are still fouls, and we weren’t able to get them. But we’ve got to play through officiating.”

James seems to have reached a boiling point, telling the media after the game, “I’m getting hit, but the refs are not seeing it that way on my drives. … It’s tough playing 46 minutes and only going to the line four times, as much as I attack the rim. So it’s just a tough situation for our team.”

However, LeBron stressed that he won’t let it deter him, saying, “I’ve got to continue to be aggressive for our team.” The Cavaliers are hoping his aggressiveness will be enough to send the series back to Cleveland for a Game 6.