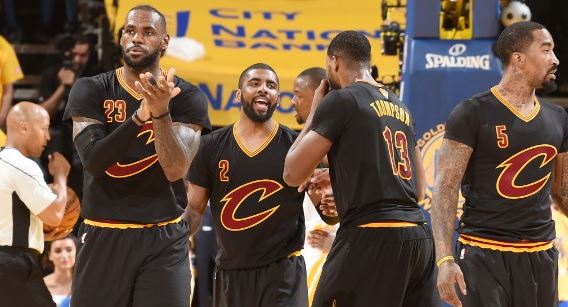 Golden State remains one victory from a second consecutive NBA title, as the Cleveland Cavaliers defeated the Warriors 112-97 Monday night. Cutting the series to 3-2, Cleveland will head back home to Quicken Loans Arena for Game 6 Thursday night.

The Warriors were unable to overcome Draymond Green’s absence, oftentimes looking out of sorts on the defensive end. Missing Green’s versatility proved even costlier once center Andrew Bogut went down with a serious knee injury in the third quarter, forcing head coach Steve Kerr into a ridiculously small lineup of Curry-Thompson-Livingston-Barnes-Iguodala.

And while going small actually led Golden State to last year’s NBA title, this unit was too little to compete on the defensive end. The result was an absolute offensive clinic by the Cavs, led by their dynamic duo of Kyrie Irving and LeBron James.

Irving and James combined for 82 points (41 apiece), marking the first time in Finals history that two teammates scored 40+ points in the same game. To make matters even more impressive, they were efficient in the process, shooting 33-for-54 from the field. LeBron also added 16 rebounds, 7 assists, 3 blocks and 3 steals, turning in a legendary performance with criticism at an all-time high.

Even though the rest of the Cavaliers combined for a meager 30 points, Irving and LeBron were simply too good for the Warriors to contain. Irving and James should receive even more of Golden State’s attention in Game 6, meaning Cleveland’s role players will need to step up if they are to force a Game 7.

With Green returning for Game 6, Irving and James finding their rhythm and a possible Game 7 on the line, this NBA Finals finally got interesting.