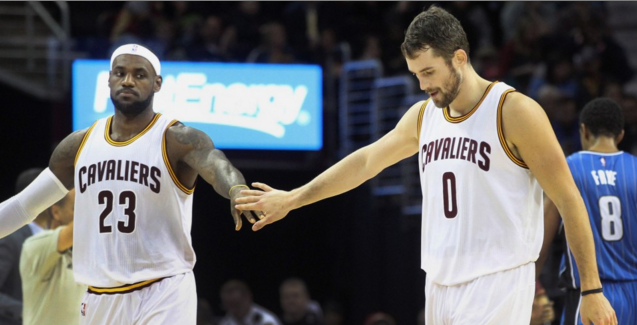 For the second consecutive season, Kevin Love will not be suiting up in the NBA’s All-Star Game. The 8-year veteran is averaging 15.7 points, 10.8 rebounds and 2.4 assists per game for the first-place Cleveland Cavaliers, but it wasn’t enough to get the nod from fans and coaches.

Clearly upset about Love not making the team, new Cavaliers head coach Tyronn Lue said, “I just thought, in this league it’s always been about winning and winning has always been rewarded. Being No. 1 in the East and Kevin being one of four guys in the NBA to average a double-double on a winning team, I’ve just never seen being a first-place team and getting one guy in. I’ve never seen that before.”

Lue is also referring to Kyrie Irving being left off the team, as LeBron was the only Cavalier who will don an All-Star uniform in Toronto. However, Lue’s comment regarding Love being only one of four guys to average a double-double on a winning team is inaccurate. Love is actually one of seven players to fall into this category, and only one – Andre Drummond – made the All-Star team.

LeBron also weighed in on the subject, telling reporters “I think Kev has played great basketball for the first half of the season. He could’ve been awarded, but hopefully those guys (Love and Irving) use it as motivation for the rest of the season and the team will as well.”

The Cavaliers are looking to use any and all sources as motivation in an effort to win their franchise’s first ever championship. A healthy and productive duo of Kyrie Irving and Kevin Love would go a long way, as we already know the NBA Finals result when LeBron has to do it on his own.