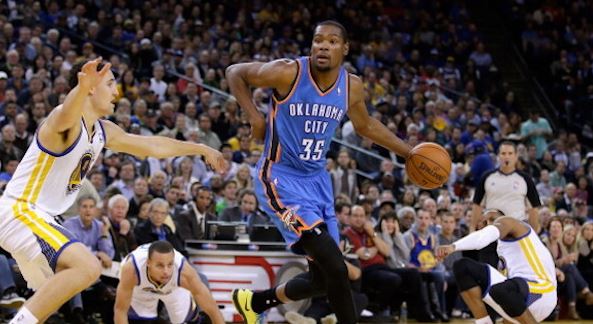 We’re only in February, and the free agency rumors involving Kevin Durant are already non-stop. After a report suggested Durant and Russell Westbrook could join forces as Los Angeles Lakers in 2017, new information considers that to be highly unlikely. Instead, league sources told The Vertical that the Golden State Warriors would be the significant frontrunner if Durant were to leave Oklahoma City.

That means panic time for the other 29 NBA franchises, as a Warriors squad featuring Stephen Curry, Klay Thompson, Kevin Durant and Draymond Green would be even more unstoppable than their current one. At 44-4 and looking to be well on their way to another NBA title, it’s easy to understand why Golden State would appeal to Durant.

For purposes of keeping the league competitively balanced though, this could be the worst thing for basketball. Fans were outraged when LeBron James, Dwyane Wade and Chris Bosh joined forces in Miami to chase a championship, but this has the potential to be even more detrimental.

When the “Heatles” got together, they were building a team from scratch and had to establish an identity. If Durant were to join Golden State, it would be viewed as the ultimate attempt at chasing a championship.

At 27 years old, Durant remains very much in the prime of his career, and is now most focused on building his legacy. The personal accolades are nice, but winning championships is the only way to climb into the all-time greats discussion.

Unfortunately for Durant though, joining the Warriors wouldn’t boost his legacy; it would diminish it. As one of the greatest scorers ever, Durant can’t run to a championship team. Instead, championship-caliber players should be gravitating toward him.

Whether Durant can create a title-contending team with the Thunder or another franchise still remains to be seen, but for the sake of avoiding tarnishing his own legacy, the Golden State Warriors should be considered off-limits.