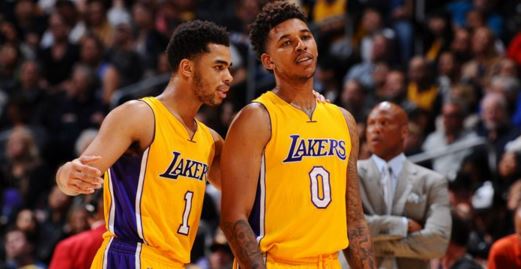 Azalea, a well-known rapper in the music industry, took to Twitter to hint at her feelings about the video:

While Russell apologized for his antics, it hasn’t helped much. Rumors around the team suggest he is still being isolated by his teammates in the locker room. On Wednesday, the rookie was booed by the Staples Center crowd during starting lineup announcements.

When asked about the scenario, Young said that he had to work it out with the former Ohio State point guard in private. During a press conference before the Lakers’ overtime win against the Miami Heat, it appeared Young still hadn’t yet resolved the matter with Russell.

Following the game, Russell made it clear that he apologized to Young while acknowledging that he jeopardized Young’s personal life. “”I reached out to [Young], let him know my apologies,” Russell said. “I don’t know if they were accepted. I wouldn’t blame him [if he didn’t].”

Young, a shooting guard who played his college ball at USC, has dated Azalea for almost two years. Even though the video was supposedly filmed a while ago, it has created an enormous rift within the Lakers’ organization.

Now, it could cost Nick Young his future wife. The Lakers, and Russell, can only hope that this situation is resolved as quickly, and calmly, as possible.