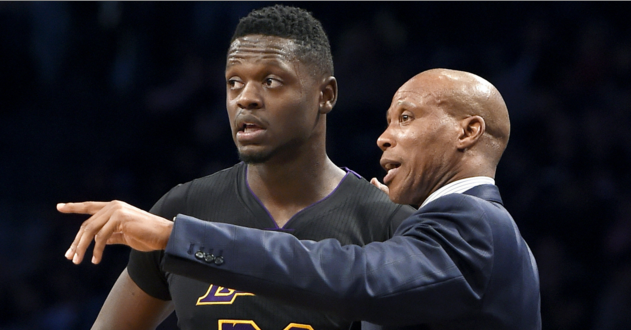 Sunday, Lakers forward Julius Randle was visibly upset with coach Byron Scott after being pulled from the team’s blowout win for a lack of effort on defense, and Scott wasn’t too pleased with Randle’s demeanor: “I think the main thing I don’t like is, when you take him out of a game, how he acts sometimes. But again, I chalk it up to immaturity and just being inexperienced at this level because it’s going to happen again.”

Unsurprisingly, Randle disagreed with both Scott’s assessments of his maturity and his play. “I was frustrated I wasn’t on the court. Simple… It wasn’t like I was 0-for-25 or something. I took four shots. I still had 12 rebounds, still had three assists. I took what the defense gave me. Regardless, basketball is an emotional sport. I’m going to feel some type of way about it. … I’m going to feel frustrated or happy or whatever it may be.”

This is all kind of a mess, especially because it’s not the first time Randle and Scott have not seen eye-to-eye. Randle will learn over time to express his issues behind closed doors and not on the court or via the media. However, his frustration is also well-placed, and indicative of a greater issue in LA.

Ostensibly, for the Lakers, the 2015-16 season is about celebrating (and profiting from) Kobe’s retirement. However, the basketball priority should be developing their promising young nucleus of Randle, D’Angelo Russell, and Jordan Clarkson, as they await another potential top-3 pick. This isn’t as easy of a balancing act as it may seem, especially considering Kobe and Scott aren’t exactly providing manuals of how 21st Century basketball is played.

In fact, Lakers fans should be legitimately alarmed by the recent comments of GM Mitch Kupchak: “Under normal circumstances [in a season like this], at some point, you would probably concentrate on just developing all your young players…But we can’t do that right now.”

This is insane and lazy. What’s the point of committing to tanking if you aren’t committed to developing a culture for your lottery picks to succeed? There are ways to do both. I feel like it’s been done before.