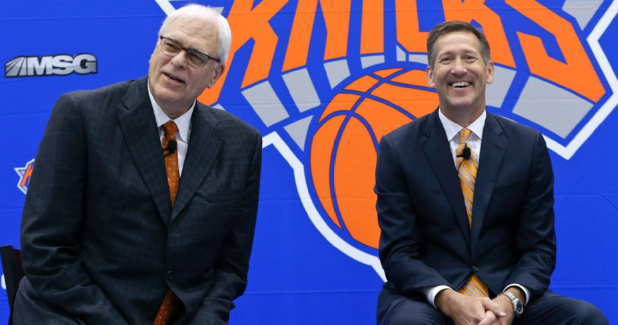 Many were surprised by Phil Jackson’s decision to hire Jeff Hornacek as the new head coach of the New York Knicks, but it quickly made sense after listening to the new coach’s comments at his introductory press conference.

Jackson has made it clear that he wants the triangle to be incorporated into New York’s offensive system, and Hornacek wasted no time in sharing that Jackson’s wish would be granted. When asked on the matter, Hornacek bluntly stated the triangle “will be part of our offense.”

However, the former Utah Jazz shooting guard clarified that he primarily views Jackson’s system as “a way to space the floor.” In today’s era of pace-and-space basketball, many critics consider Jackson’s offensive system archaic, but Hornacek will wrestle with the difficult task of finding a common ground between the two philosophies.

Luckily for Hornacek, he has two strong pieces to work with in Carmelo Anthony and Kristaps Porzingis to make the process a little easier. Hornacek was quite vocal in stressing the importance of building a strong rapport with both players and hasn’t shied away from the bright lights of New York:

“My hope is now that I’m here that we can get some of those players to come in here and if you want to win, what better place to win than New York. So to me it’s a great opportunity and the excitement level, I know we can do great things.”