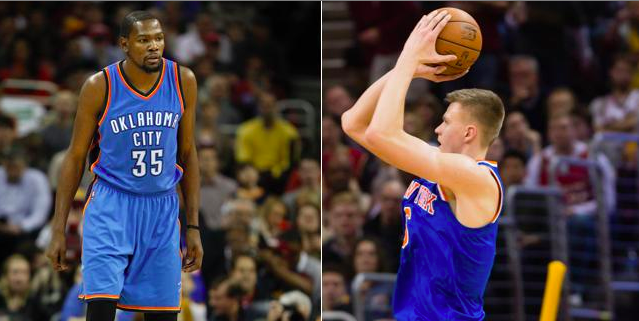 After his stellar play in the first half of the season, rookie Kristaps Porzingis has earned several quality nicknames from Knicks fans around the world. Scorezingis. Zinger. Porzingod. The Flamingo. Or, as he prefers, Kris.

On Monday, however, superstar Kevin Durant added another nickname to the fold that might stick longer than the others. With his Thunder in town to play the Knicks, Durant provided a unique scouting report on Porzingis’ game.

“He can shoot, he can make the right plays, he can defend, he’s a 7-footer that can shoot all the way out to the 3-point line,” he explained. “That’s rare. And block shots – that’s like a unicorn in this league.”

It seems like an interesting tactic for Durant to compare the young player to this exalted mythical creature. Upon further reflection, though, this nickname might be his best one yet.

Porzingis’ blend of size and skill are unparalleled for a 20-year-old big man, and he’s erased any and all doubt that drafting him No. 4 was a mistake. Among rookies, he’s third in scoring (14.0), second in rebounding (7.8) and first in blocks (2.0), while helping the Knicks remain relevant in the Eastern Conference.

Props to Durant for his creativity here. It was a bold move, but hopefully it pays off for him when the two teams play on Tuesday night. One thing’s for sure – the Unicorn will be ready.