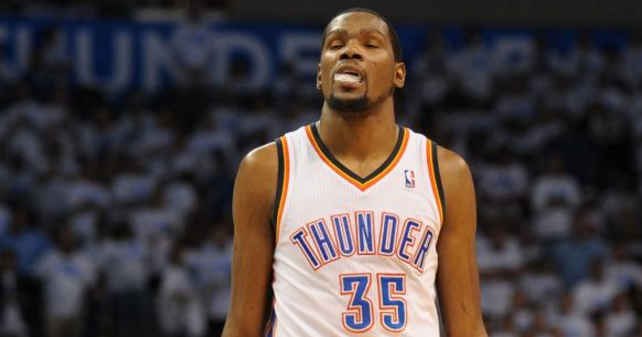 An abysmal performance by Kevin Durant in Game 2 has given the Dallas Mavericks hope heading home with the first round series tied 1-1.

Durant tied Michael Jordan for most misses in a postseason game since 1997 by posting a horrendous 7-of-33 clip. Durant, who went 2-of-11 from 3-point range, missed more shots than any other game in his career. The former Texas Longhorn finished with 21 points in the 85-84 loss, but missed three shots in the final minute, including a layup with three seconds left that would have given the Thunder the lead.

“Just missed ’em. Just missed ’em,” Durant said. “Everything looked good for me. Coach drew up some good plays. Teammates set great screens. Russell [Westbrook] delivered the ball perfect. It’s on me after that. I’ve just got to make ’em next game.”

Following Durant’s missed layup with three seconds remaining, Steven Adams corralled the rebound and put it back up, only to have the buzzer go off just before the ball left his finger tips. Although Durant uncharacteristically struggled throughout the game, he remained confident he would turn it around and help secure a 2-0 series lead.

“Bad shooting night for me,” Durant said. “It’s a part of it. I wish it didn’t happen tonight, but it’s a part of it. Got some great looks all-night and just didn’t knock ’em down. Just stick with my routine, don’t do too much extra, and go out there tomorrow and get ready for practice.”

“You constantly keep feeding him,” Westbrook said. “He’s the best player in the world. You have nights like that. My job is to find him and find a way to get him an easy basket. He missed easy ones tonight, but I know Kevin. I’ve been with him for too long, and that won’t happen again.”

After a 38-point thrashing in Game 1, losing to a depleted Dallas squad came as a shock to the Thunder. But with two of the best players in the NBA and a strong belief that Durant will regain his touch, Oklahoma City remains the strong favorite against the Mavericks.