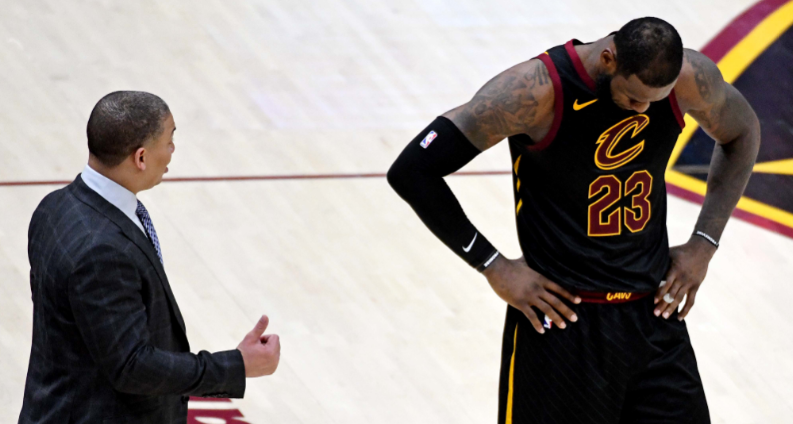 The situation was familiar. Returning home to Cleveland after losing the opening two games in Oakland, the Cleveland Cavaliers had one last chance to make the 2018 Finals a series again. Instead, with 49.8 seconds remaining in the fourth quarter, Kevin Durant extinguished the Cavs’ last bit of hope for a second straight year.

One of the most cold-blooded shots in Finals history my God Kevin Durant pic.twitter.com/v4nBHnxjCb

With the Cavaliers on the brink of elimination, the question is: are we about to witness LeBron’s last game in a Cleveland uniform? Four years after making his return home, there is a growing sense that LeBron is angling his way out of Ohio for a second time. The joy that was easy to see on his face last season has vanished. Kyrie Irving, the superstar point guard who helped LeBron carry Cleveland past the Warriors, is gone. Kevin Love isn’t getting any younger, and the rest of the roster is either old or being paid more than they’re worth.

“My goal is still to win as many titles as possible, no question. But what’s most important for me is bringing one trophy back to Northeast Ohio.”

Let’s break down that quote from LeBron’s 2014 “I’m Coming Home” article. My goal is still to win as many titles as possible. In the four years since his return, the Cavaliers have made it to the Finals all four years. LeBron’s Cavaliers entered each series as the underdog. One loss away from yet another Finals loss, LeBron will fall to the Warriors juggernaut for the third time. At this point, there is little to no hope that the Cavaliers can do anything to dethrone Golden State anytime soon. Whether it is now, or in future years, LeBron knows the window has passed.

LeBron down 3-0 starting to see the writing on the wall. pic.twitter.com/OBBJiboyHr

But what’s most important for me is bringing one trophy back to Northeast Ohio. The inexplicable comeback in the 2016 Finals fulfilled this goal. LeBron finally brought the elusive championship to Cleveland. So what’s the negative spin? Now that LeBron delivered a championship, what more does he owe Cleveland? LeBron never had to come back to Cleveland, he had a great situation in Miami. Pat Riley, Erik Spoelstra, a city known for attracting stars…but he still came home. So now that he’s home, and has won a championship, why would he leave?

No Kyrie. Bad cap situation. Celtics and 76ers on the rise. Dan Gilbert.

To beat the Warriors, a team will need multiple stars and a great supporting cast. The three main options for LeBron – Houston, Philadelphia, and Los Angeles (no, not you Clippers) – all provide more than Cleveland can offer. In Houston, LeBron would be playing with the likely MVP of 2018, James Harden, and possibly Chris Paul if he re-signs. Teaming up with Joel Embiid and Ben Simmons in Philadelphia is certainly more intriguing than playing with Jordan Clarkson and J.R. Smith. The Lakers have a young and talented roster with enough cap space for LeBron to bring another max player with him.

Wherever LeBron ends up, it’s looking more and more like LeBron is done with Cleveland. Game 4 may not only be the last game of the NBA season, but LeBron’s last game in Cleveland as a Cavalier. And if that’s the case, it’s the Cavaliers’ last game being relevant for a long time.