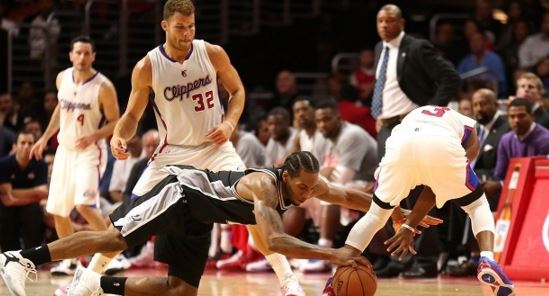 For the second consecutive season, Kawhi Leonard has won the NBA’s Defensive Player of the Year award. Once again, Leonard edged out the Golden State Warriors’ Draymond Green for the prestigious honor.

While there was some controversy over the award last season after Green received more first-place votes but finished with fewer overall points, Leonard won by a much bigger margin this season. Claiming 83 of the 140 first-place votes, Leonard’s 547 points to Draymond’s 421 made this category a bit of a runaway. The Miami Heat’s Hassan Whiteside finished third with 83 points.

Leonard continues to be the premiere wing stopper in today’s league, and was the key member of San Antonio’s historically great defense. The Spurs held opponents to 92.9 points per game, which was three points fewer than any other team in the league.

Kawhi’s rare blend of length, speed, agility and athleticism allows him to match up against any player in the league. Even though head coach Gregg Popovich doesn’t elect to have Leonard guard all five positions in the same way Green does for the Warriors, Kawhi is certainly more than capable.

Last year, Leonard became the first wing to win the award since Ron Artest did it during the 2003-2004 season. Now having won it for a second consecutive season, Leonard joins even rarer company. The former San Diego State Aztec is the first player to win the award back-to-back years as a wing defender since Sidney Moncrief won it for the 1982-1983 and 1983-1984 seasons.

While Leonard’s lockdown defense is unmatched, his progression on offense has turned him into the best two-way player in the game. Serving as San Antonio’s go-to scorer, Leonard is averaging a career high 21.2 points per game this season.

And at only 24 years old, much to the chagrin of the other 29 teams in the league, Kawhi Leonard will only continue to get better.